With me working full-time and the kids now fully fledged teenagers, this week’s post focuses on how to create 3 mid-week meals with Dolmio at speed! With the boys now regularly eating me out of house and home, I need to prepare more wholesome evening meals, that will not have them blurting “I’m still hungry!” at the end of the meal! With sport being very much part of their after-school activities, they constantly are looking to me for FOOD, FOOD and more FOOD!  And of course, I am trying to provide the right food but quickly, after a long day at work, and without compromising on flavour, taste and wholesome goodness, so thank goodness for Dolmio! With Dolmio arranging a hamper of goodies to arrive, this was well-timed to say the least! Dolmio set the #Thankgoodness challenge : to create a nutritious mid-week family meal. The goal – a simple, good-f0r-you meal including a jar of Dolmio Bolognese sauce which contains no artificial colours, flavours, preservatives or sweeteners. The ideal result – clean plates all round.

Before the delivery arrived, I wanted to be sure I knew exactly what goes into the Dolmio jar and specifically the bolognese sauce they were sending me to trial. So many jars of ready-made sauce have those hidden extras included, that I don’t necessarily want to feed the kids with, but this is where Dolmio is a little different. I checked out their youtube video and you can watch it too.

I’ve also included a handy infographic at the end of this post, so you can visually see exactly what goes into a jar of Dolmio Bolognese sauce.

Dolmio Bolognese Original 500g sauce is 100% natural. In each jar, you’ll find at least 10 juicy diced tomatoes, a dollop of tomato puree, half an onion, a tablespoon of sunflower oil, a couple of cloves of garlic, a handful of herbs, a teaspoon of cornflour, salt, a pinch of pepper, two teaspoons of added beet sugar to taste, a splash of water, squeeze of lemon juice and nothing more. That’s it! It provides one of your 5 a day too.

The delivery arrived and I immediately felt I was on the Ready Steady Cook! TV set, a bit like those celebrity chefs (yes, dream on Lunchbox Lady!) and I started visualising all the delights I could rustle up with the hamper of goodies. Jacket potatoes, ratatouille, chilli con carne, spaghetti bolognese, lasagne, stuff the peppers with something delicious, chicken with dolmio sauce, the list goes on. I came up with 3 mid-week meals with Dolmio, and then proceeded to add even more ideas to my list of options! The possibilities are endless! 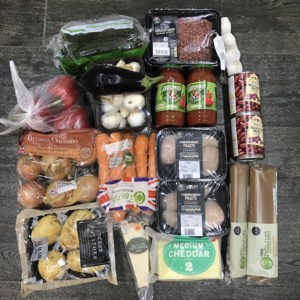 The hamper totalled about £40 in value and when you sit down and work out what can be created meal-wise for the family on just £40 worth of ingredients, it’s quite amazing. You just need to plan the meals, buy the ingredients and just do it! Easier said than done sometimes, when you come home tired after work, but half the battle is in the preparation and in having a plan. If you know what you are going to cook, have the ingredients in the house ready, you just have to then do it. Create that mid-week meal! Be sure to choose a recipe that can be rustled up quickly, and set to it!  The hamper was designed to cater for a family of 4, and I opted for the meat option.

My head was spinning with the possibilities! Chilli was a definite, but then something with the chicken… Here’s a teaser collage of the 3 mid-week meals with Dolmio that I finally created… 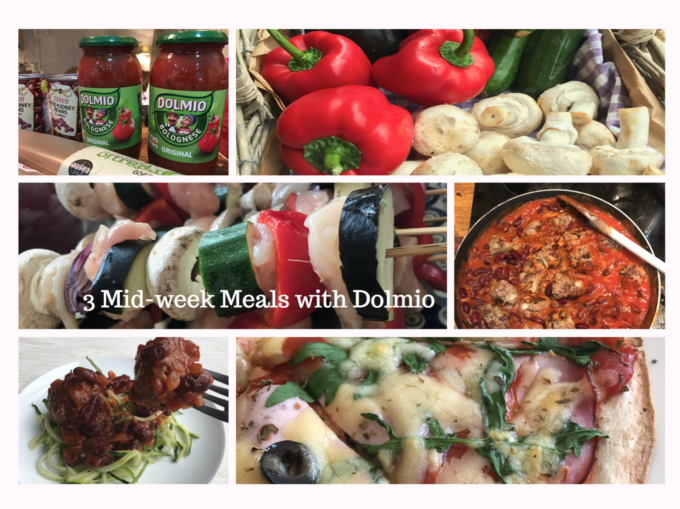 The kidney beans, minced beef, onion and a jar of Dolmio immediately got me thinking chilli con carne. But I wanted something a little different. I then took to my instagram feed for some inspiration and stumbled across an image of meatballs in a tomato sauce. Hey I thought?! How about chilli con carne meatballs, in the Dolmio sauce served on a bed of rice? Great, mid-week meal idea number one! 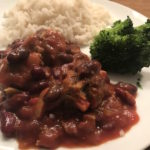 These are really simple to make. The meatballs before browning, will look like this. 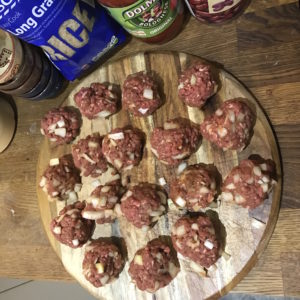 Add them to the pan of chilli con carne sauce as per instructions in the recipe. 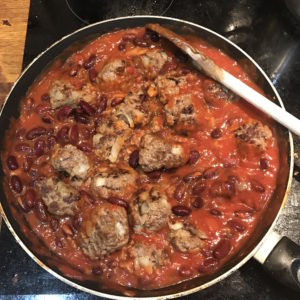 And then served with rice and broccoli… 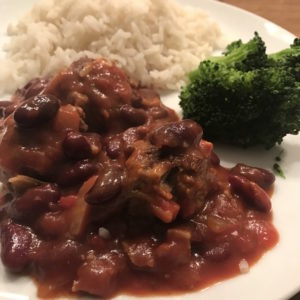 So we ate this for dinner on the Monday night, and there were a couple of meatballs left over that I squirrelled away and stored in the fridge over night, which I then had for lunch the next day. As an alternative though, I laid the meatballs on a bed of spiral courgette, gently warmed it up in the microwave. A delicious lunch! 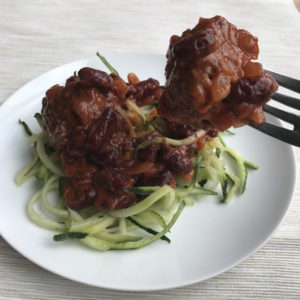 I then searched again and thought what else can I make? I have chicken breasts, wholemeal spaghetti, more onions, carrots.. I decided on chicken kebab sticks, a way of getting the kids to try the various vegetables on offer, including courgette, mushrooms, red pepper, onion, and used the Dolmio sauce as a dipping sauce. Voila! Mid-week meal number two! 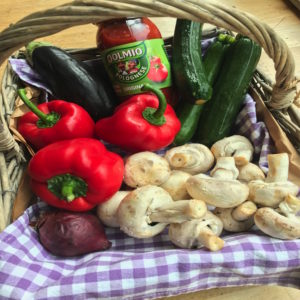 To make the chicken kebabs I used chicken breast x 4, red peppers, courgettes, mushroom, onion, and aubergine, all chopped up into chunks. Meanwhile I soaked the bamboo skewers in water to prevent them from burning on the BBQ or under the grill.

All prepped up, ready for the barbie! 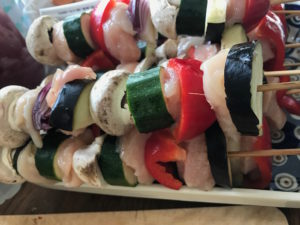 On this occasion, I popped them under the grill, but with the longer days and lighter evenings, why not make a Friday night BBQ night? It starts the weekend off on the right footing don’t you think? We served these up with rice and used the Dolmio sauce as a dip. It was delicious and the boys loved it! 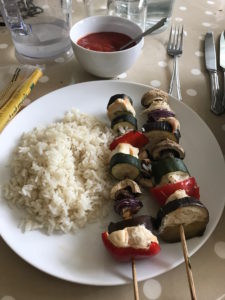 The youngest decided to use tortilla wraps, and popped his chicken chunks, veggies and Dolmio sauce all into a wrap! Ingenious! Get the boys to do it yourself!

Following on from this idea of utilising wraps and thinking DIY, we come to last meal idea in my 3 mid-week meals with Dolmio.

I decided to help take the pressure off me, let’s rope the boys into help. Let’s do pizza but a home-made DIY version of a pizza. Not the stodgy pizza base, but use tortilla wraps as the base! Half the battle having the pizza base ready-made! I had already bought the tortilla wraps in, used the jar of Dolmio, sliced mushrooms, sliced olives, grated cheese, red peppers and some rocket. Perfect for mid-week meal number three!

So the ingredients we used were:

Tortilla wraps. We always use Mission Deli wraps – the wheat and white. Jar of Dolmio Bolognese sauce. Grated cheese. We used the cheddar that came in the hamper. Sliced mushrooms, Sliced ham, Sliced pepper, a handful of rocket and some sliced black olives. 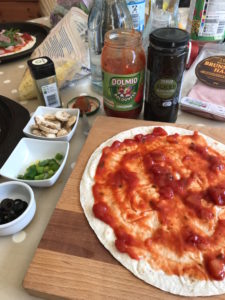 As you can see, I love to play with my food. I made a funny face. I get the kids to be creative. OK it worked a bit better when they were younger! But hey! you have to keep trying! Food is fun! Check out some of the other food art posts we’ve done in the past! 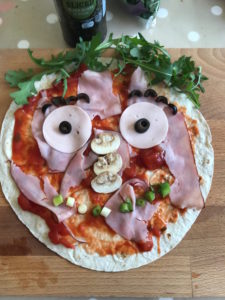 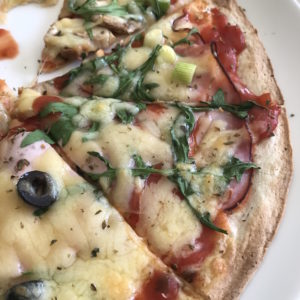 I love the crispy thin base… Mmmm!

So that’s the mid-week meals I rustled up using Dolmio.

I will definitely be cooking up these mid-week dishes again. The teens said they were “delish” and that is really saying something! To get a glimmer of a smile and enthusiasm from the boys is priceless!  I will also be searching out recipes that have more cheats included, as my week has just got busier! So do sign up to the newsletter or follow us on social media @lunchboxworld to be inspired by our meals and lunch box ideas.

And as promised, below the infographic of what each 500g jar of Dolmio Bolognese sauce contains. 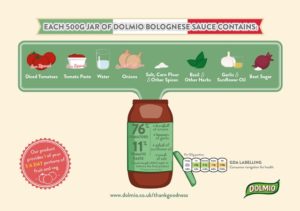 We’d love to hear your comments and if this post has inspired you to have a go at creating inspiring mid-week meals!

If you want even more inspiration with Dolmio, check out Chef Willem with his step by step guide to his version of Spaghetti Bolognese with hidden veggies, served up with confetti spaghetti!

Disclaimer: all thoughts and opinions are my own. I was sent the hamper of ingredients in order to create some delicious mid-week meals with Dolmio for the growing family and to show how easy it can be.

This post is an entry for the #Dolmio #ThankGoodness Challenge sponsored by Dolmio.