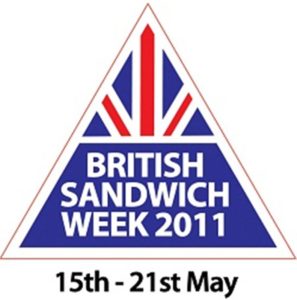 At Lunchbox World we have always wondered what are Britain’s Favourite Sandwiches? What would be in the top ten, for those buying outside the home and for those making the packed lunch in the home. Will it be the same fillings or totally different?

Well, as luck would have it, this week being British Sandwich Week, an email landed in our inbox with the latest stats!

Chicken, as you can imagine, remains to be the most popular filling in sandwiches bought outside the home.  Although the last year has seen a surge in demand for more traditional sandwich fillings such as egg, cheese and ham, according to a survey of multiple sandwich retailers issued by the British Sandwich Association for British Sandwich Week 2011.

About a third of all the sandwiches we buy outside the home contain chicken in one form or another but even this top seller has lost some favour with volume sales down by over 7% in the year to March 2011.   Meanwhile egg and ham sandwich sales are up by around 11% and 9% respectively, according to research by Kantar among leading sandwich retailers.

(Source: Kantar)
Figures in brackets show position a year ago

Despite all the pressures on consumer spending, the commercial sandwich industry has continued to see volume growth in the last year with a two per cent rise in sales.  While some consumers have returned to making lunch box sandwiches at home, these have been more than balanced by others who have chosen to purchase sandwiches rather than spending out elsewhere.

There is also some evidence that consumers find making lunch box sandwiches a chore and many return to buying sandwiches after a few weeks because the choice is so much greater than the left-overs in fridges.   The savings can also be limited if wastage is taken into account.

In the home, the top flavours that continue dominate are ham and cheese, perhaps because these are most commonly found in the fridge. But this is where Lunchbox World comes in! Our recipe section is full of fresh ideas, salad ideas.

Remember a packed lunch does not have to be with bread, or even be a sandwich. Variety is key to both life and your lunch box! So perhaps, we are a little less adventurous when it comes to making our own sandwiches but with a little forward planning, we believe we can help you change all that.

It is agreed that fillings may be something of a fashion item in the commercial sandwich world, but then interesting that the traditional wedge sandwich continues to be our favourite when it comes to bread.    Did you know that 58% of all commercially made sandwiches are still made with standard sandwich bread?

Admittedly there are other breads that come and go in popularity – in the last year paninis and wraps have been the “in” choices but they continue to account for only a small share of the overall market: wraps currently have about 4% share and paninis below 2%.

So check out our recipe section for recipes and our hints and tips section for inspiration and our shop for new lunch box kit!

« Reasons to be Cheerful – 1,2,3
Stephen Joseph Owl Lunch bag just back for school! »