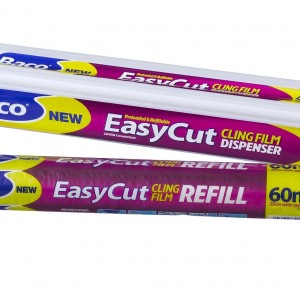 Those clever kitchen people at Baco have finally solved one of the kitchen’s greatest frustrations with the launch of the new Baco EasyCut refillable cling film dispenser.
You remember all those times you just want to wrap a sandwich, cover a piece of cake, pop in the lunch box, and off you go?
But instead the reality is, you scratch and scratch at the tube of clingfilm frantically searching for the end, time is meanwhile ticking by, then having found an end, discover its all stuck together with static. You try and unravel it, then give up, wasting a chunk, try again and just end up being irritated and waste loads of precious time?
Well, those days are now over thanks to Baco!

New Baco EasyCut is a clever dispenser of clingfilm. It cuts cling film with precision and is simple and speedy to use. And most importantly, Baco EasyCut retains the end of the cling film for easy retrieval for the next time it’s needed; so no more picking and scratching the roll in search of a useable end.

Baco EasyCut is made from durable and recyclable PVC and is sleek enough to fit into a kitchen drawer or cupboard. Each dispenser is pre-loaded with 40m of cling film and, when required, can be refilled simply with unique Baco EasyCut Refill Rolls.

We have FIVE to give away, along with a bundle of other BACO goodies in our competition this month.
For your chance to win, visit the competition page and have a go!