Who would have thought it? A recent survey shows these girls prefer a pie for lunch. First Ginsters bought out a limited edition loveheart shaped pasty just for Valentine’s, now a model’s eating pie at lunch time? 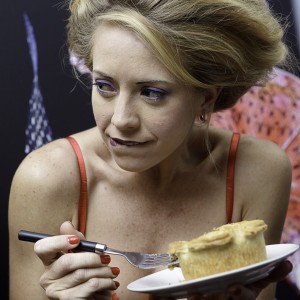 Going from grub to gourmet as the ‘fashion pack’ sets their eye firmly on the pie!
Forget clutching the latest handbag, heels or Lady Gaga style clip-on fringe – the humble pie is proving to be the number one accessory at catwalk events across the capital this year.
Contrary to runway reality, a recent survey commissioned by Sainsbury’s has unveiled how the UK’s fashionistas are more likely to reach for a pie on a weekly basis compared to those who aren’t interested in fashion. It seems this new generation of on-trend, discerning pastry fans is driving the pie from grub to gourmet.
According to those polled, it seems pies are this year’s flavour du jour, and it’s all down to the inclusion of this most retro of British dishes on the menus at the capital’s hottest eateries* including Hix, The Ivy and Bull & Last.

These fashion-conscious Brits also showed that while sushi was considered the trendiest food choice, over a fifth (22%) would be more likely to choose a tasty pie after a hard day’s graft compared with a wafer-thin 5% who would choose sushi.
Doing away with the perception of waif-like models nibbling at morsels, almost half (49%) of size 10 and below females said they eat at least one savoury pie per month, along with 63% of Brits overall.
As predicted by retail experts Mintel and key trend setters 2011** is set to be the ‘Year of the Pie’, and almost a quarter (23%) of ‘fashionistas’ surveyed recognised the rise in popularity of the pie compared to 3 years ago.
Nicola Williamson, Sainsbury’s Pie Buyer said: “It’s great to see fashion conscious women embracing the trend of pies, especially as we’ve developed many of our new recipes with them in mind!”

From a list of conventional pie flavours, Brits voted the top five flavours they would most like to try eat as:
Steak & Ale
Steak & Kidney
Chicken & Mushroom
Beef & Onion
Cheese & Onion

So perhaps we can have our pie and eat it! Tell us on the Lunchbox World Facebook Page, what’s your favourite pie?!