Well, today was the tube strike, which I am happy to say didnot affect me directly, but did impact the traffic on the way to work. No, it was just one of those days. Husband is away, so I have to develop broad shoulders and stand a foot taller whenever he is away to shepherd everyone this way and that. (Maybe I should get a sheepdog to help me herd the brood about. Maybe that would get them out the door in the mornings!)

So today was just another day: breakfast, lunchboxes, school, work, after school activities, just the usual.
Although, I had not gotten much sleep last night as I had some computer problems. You know the ones where you think it will take just a minute to fix, and then before you know it, it is gone midnight and you are still not quite there fixing it, so you leave it to another day! So on 6 hours sleep and without a husband, I was not particularly in the best of moods, but trying to put on a brave face nonetheless, keep the calm and get everyone fed, watered and out the door and off to early bird club.
So I had breakfast first, always good to shout commands on a full stomach! Then woke the brood up. Breakfast went ok, but then discovered absolutely no bread for lunch. Vaguely remembered I had had that fleeting thought the night before, but was so preoccupied sorting out the computer, that the thought vanished just as quickly as it had come. So quickly grabbed a loaf out of the freezer, made the sandwiches and it is ok really, they do thaw out by lunchtime, although the bread was so frozen, I could only cut rather fat wedged sandwiches, not the usual dainty four I give them. Oh well! Tomorrow is another day! Fruit, chew bars, pack of Sunny Raisins, chop the orange into quarter wedges for sucking at playtime, drinks. Icepack to finish it off, then run through after school activities: another drink and something to eat, normally a chew bar or couple of jaffa cakes (always good – even the swimming club recommend them after exercise).
Luckily I had made sure all their kit bags were ready the night before, so they were all lined up in the hall, standing to attention (the bags I mean! No never the children, not until I have asked them or rather told them 5 times and then they react.)
I am trying to get the bags in the hallway ready the night before to alleviate the pressure that builds in the mornings, and also to shift the responsibility to them. They have to pack their bags the night before and make sure all their PE kit is there, as well as their two trainers, not just the one! So they get to know how things should work, as really I cannot keep doing everything for all three of them and think about work, the blog, the website, Amazon, piano, and now all these tomato plants, that are patiently waiting for their bit of attention! Oh, and let’s not forget the husband in the list somewhere as well!
Out of the house, off we go. Drop the older two at their school early bird club, then off to the next school. Said our goodbyes, jumped back in the car, sigh in relief, got that done, now off to work. Five minutes into the journey at a roundabout, not sure what made me glance down in the passenger seat, but there was King Julien’s lunchbox, sitting there, almost smiling up at me with humour! Oh! so round the roundabout, up the hill, back to school to drop off his lunch. I couldn’t not go back could I!
So eventually off to work, got into work and up on the 8th floor looked down to this rather rare sight – all the tubes parked in the station, waiting aimlessly with no place to go. What a strange site. As luck would have it (my luck had obviously turned a corner!) I had my camera in my bag, so can load it up to share with you all! 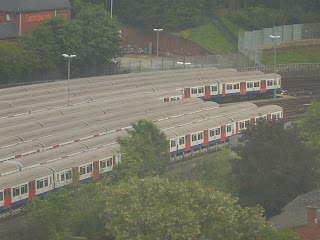 « New Competition This Month! 10 copies of “Eggs” by Michel Roux to give away!
Another Day… Just brighter »