Just in time for Easter, “Blaze and the Monster Machines DVD: Blaze of Glory” is released! For my loyal readers, you’ll know my own kids are now in their teens. However, the DVD landed on my doorstep, just as I was rushing round to babysit for little D and tiny T, my little niece and nephew.

Being greeted with tears and sobs of “Mummy! Mummy!” was not going to put me off from showing the DVD to little T and D. It actually worked as a great distraction technique, as their Mummy dashed out the door, and I took residence for the evening to babysit for the little people once more. 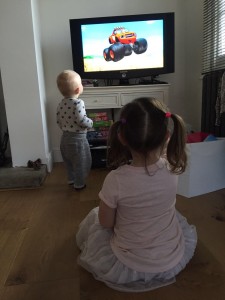 Blaze is a monster machine, with flame tread on the tyres and reminds me a little of Lightning McQueen from the Disney Cars movie. Blaze is driven by AJ, who is often trying to get to the next race. Blaze meets friends along the way, including Starla, a cowgirl kind of a truck that’s lost her piston, and Crusher, who’s always up to mischief.

What amazed me about the DVD was how educational it was, full of complex vocabulary and tricky science (force, magnets, scales to name just a couple of examples). I glanced across at D and T to see how enthralled they really were, and they just sat there, lapping it up. But it got me thinking: with such a shortage of engineers in the UK, as well as a shortage in science and maths teachers, it seems they are wanting to get kids hooked from a really young age on mechanics, and engineering! If that is the case, it is working if they are! Kids are absolute sponges for knowledge! 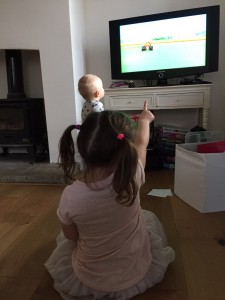 Initially the kids just saw the fast cars, the monster machines, dashing here and there, racing to get the speed, but then once we got into it, there were challenges for the kids to get involved, with numbers appearing on screen. The kids were encouraged to shout out the answers and help solve the problem, as well as learn fun facts on machinery and how things work. 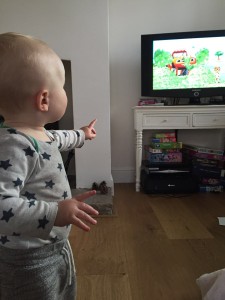 The DVD is described as pre-school, and I suppose that is the age of D – she starts school in September, and she knows her numbers really well already. So if you are looking for something fun and educational that’ll make science and numbers more fun, then this could be what you are looking for.

“Blaze and the Monster Machines DVD – Blaze of Glory” U certificate is released by Nickelodeon and Universal on 14 March 2016. Runtime is 64 minutes. RRP £9.99.

We watched a couple of episodes before the kids were bundled off to bed.

When D was asked which DVD she preferred – Paw Patrol or Blaze, she promptly replied that “she loved Blaze she could kiss it! She likes it more than Paw Patrol as Blaze goes really fast and races.” She learnt all the characters names really quickly too!

For me, there is room for both DVDs like Paw Patrol and Blaze. Blaze is fast paced but Paw Patrol much gentler for little T.

For more information, check out the link at Amazon.

Disclaimer: The Blaze and the Monster Machines DVD: Blaze of Glory was sent to me for review purposes. All thoughts and opinions are my own and those of the children that viewed it.