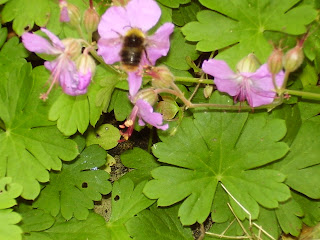 Bees are nice, bees are sweet
We encourage them into our garden
We have buddleia, lavendar, all things they love
They just buzz here, buzz there
But then they buzz, buzz, sting…
Tuna was stung at the weekend, whilst playing in the garden late one afternoon.
We just thought it was another bickering session with the boys that ended in tears!
No, not this time, and poor thing, she got the full brunt of the sting, as the tail and stinger was left in her hand, which I carefully tweezered out, so as not to leave any barbs or anything in her hand to then infect it.
Now on a course of antibiotics, following a suspected infection, the swelling of her hand is at last going down. Her hand was starting to look like one of the tennis balls at Wimbledon!
As for the bee, I think we will hold a mini funeral tomorrow after school. We have no after school clubs tomorrow, so can cook up some Brownies, and just think about that poor little bee that was trapped beneath her hand on the grass…
We have also just sown a whole load of seeds that are called “Creepy Crawly mixture“, encouraging wildlife back into your garden. We are now thinking maybe there are some bugs we need to be a little bit wary of. However, we do hope the grasshoppers will come back! We love trying to catch those! We will let you know how the creepy crawly garden develops on in the coming weeks!
« Walk to school week and healthy lunches
The Best of Britain »