Nits is going round the class again (rolls eyes). Yep, with regularity we get the note home… We deal with it, we move on…
Unlike other mums, who’ve actually decided best not to send their kids in to school today, we just deal with it. In my mind, nits is not quite the same as an outbreak of mumps, measles or other illnesses. But maybe I am wrong…
Or do some people see nits as “an illness” now?

So last night, the bath was run, the boys plonked in it and the “cleaning process” began. 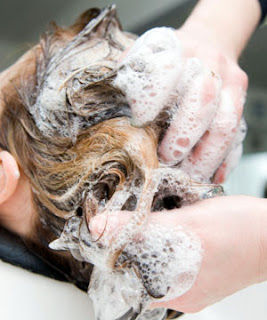 King Julien first, he mucks around the least. Spike was steering clear, having submersed himself in the bath like a submarine (luckily they are good swimmers and have perfected the art of holding their breath for considerable lengths of time).

Now on the way home I had hurriedly purchased more sweet smelling shampoo, and I am certain I picked up conditioner. But, as I say, I was in a rush as King Julien was so worn out, he just wanted to get home. All I know is it was camomile for sure, anything to promote prompt sleep.
(What is it with back to school and that fatigue that sets in within week one?)

Shampooed, rinsed, and second shampoo was already completed. Now for the conditioner. Out with the nit comb, but what?
Yank, pull, what is it with this conditioner?
Why’s the hair not silky?
Yank, pull.
I thought nothing more and continued, pulling and yanking assuming it was all down to the unfamiliar brand I had picked up… This hair will straighten out and will be silky, preventing those little beasties from hanging on in the hair…

Tears promptly flowed as the yanking and knots continued to form in his hair. Right, that’s it, nothing in there anyway.
All clear.
OK child number two, Spike.
Your turn.
He gingerly moved forwards in the bath, as King Julien’s moved quickly away, sobbing eventually abated.
Shampooed, not just once but twice, I then commenced again with the “conditioner” I had purchased. Again, it frothed and knotted the hair. The nit comb just wasn’t sliding through the hair like on numerous previous occasions. “What is it with this shampoo?” I screamed.

What?!
I checked the label again.
Oh, it’s just creamy looking shampoo, not conditioner at all.

So does this make me a bad mother?
Trying to “clean” the kids heads but only ends up pulling their hair out instead?

Both sobbed whilst I dried their hair, muttering apologies under my breath, bending and kissing their cheeks as I attempted to make amends…

I must need glasses or something… How can anyone read “conditioner” when it blatantly said “shampoo”?
What a nutter…

Please tell me this is just a blip and not a New Me that’s arrived?!