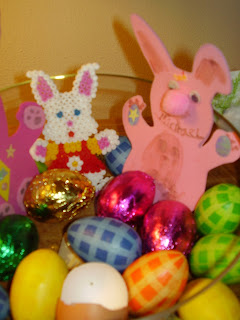 Easter Sunday arrived, my Mother was coming to visit too. Even the Easter bunny paid a visit, which thrilled the brood. Although this was all over by 830am on the Sunday! All the eggs were promptly found, the baskets filled, and “What’s next?” was cried. King Julien surprised the older two by outwitting them, sneaking out 5 minutes ahead of the others, thus having a head start of 9 eggs before the others were even dressed!
Keen to keep the brood occupied for what was now going to be a long day, we encouraged them to put on a little puppet show, for when Granny arrived, to keep her amused. They decided to use some of the hand puppets they had made, aswell as the finger puppets they had : the chick, the lamb, the bunny, the cow. They were all rehearsing in the lounge, eventually settling down in agreement to who was playing what part, saying what words, using what puppets and so on. I could even hear them start to play the ocarinas, practicing hot cross buns, London’s burning, Old Macdonald, you know all the seasonal favourites!
Mr Whippy had escaped outside with his latest acquisition – his long ladders, and had started on trimming back the high overgrown bushes, the wisteria growing up the side of the house, enjoying the sun, and stopping to watch every plane fly high overhead. Yes, alot got done outside…
I meanwhile was getting increasingly hot under the collar, chained to the kitchen sink, putting together the Easter Sunday lunch. I decided to cook lamb being Easter, with all the trimmings. You have to set a tradition you see. So the children do not think, oh Easter, that is just another weekend, nothing special in that. No no, I make a bit of a rod for my own back. We made a chocolate cake, decorated with mini chocolate eggs, that would double up as pud and cake for later! We boiled a batch of eggs up, then dyed them for the Easter basket, another table display, ready for jarping later on at tea-time. We put together not only one display of twigs with eggs hanging from it in the hall, but one in the dining room too.
Later on, 430pm came and went… Granny was due at 4pm. She has a habit of arriving when she is ready, not a moment earlier or later, it’s her own schedule… 5pm arrived. The brood were now getting hungry for tea and what about jarping with the eggs.. She arrived at 510pm.
We promptly sat down and the jarping commenced. King Julien, it was his lucky day! He won at jarping, with the strongest egg of all. Spike was very disheartened, and it was now too late for the puppet show.
However, the brood being keen to show Granny their latest tricks, grabbed their ocarinas. Before anyone else was ready, King Julien started to play Happy Birthday on the ocarina. This was the first time he had actually played something! I nearly fell off my chair! He is such a dark horse. He waits until he can do something and only then will he do it. I had to pick my jaw up from the floor!!
So you see, those ocarina’s were a great buy. There is more than a slim hope. Maybe King Julien will be part of the ocarina club at school.
« Baked Bruschetta Style Naan
A visit to see Drake! »