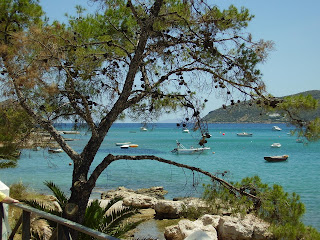 With the Euro incredibly strong this year, we’re having to be clever with everything we spend our money on, particularly with our lunches.
Bread is a staple as always here and feta cheese, tomatoes, cucumber, olives, salami, chilled water always taste delicious here. Freshly chopped fruit in plastic containers easily eaten as already it is becoming too hot and eating with absolute ease is the only way forward. Apricots are delicious right now and in season at the local markets.

Bakeries come into their own here, opening really early in the morning and closing really late. A tradition that is long gone in the UK. The bread is always fresh with a great crisp crust, that surrounds the fresh bread within. They also sell an array of homemade biscuits : some vanilla flavoured, some chocolate, some cinnamon. Each time we become more adventurous, trying the new ones on offer. Yesterday it was the savoury ones – flavoured with cheese, oregano, salt and pepper. A bit like cheese straws but on a shortbread base – great for that snack on the beach, keeping you going until later.

Sitting by the sea with the water lapping at our feet. Rays of sun beating down on us. Forcing you to relax and take five away from the Northern European pace of life. Brood playing happily, catching crabs, catching fish, collecting them in buckets (only to throw them back in the sea when we leave), swimming, building sandcastles, loving the freedom that beach holidays bring. Swimming is the one activity I am so glad we invested so heavily in. They are still having lessons, training weekly. They are all such strong swimmers so I do not need to worry so acutely about them. Yes, it is the sea so you always have to be respectful, but in our little bay, on our island on the mainland, the waters are very calm and tranquil. So it is the one time I can relax just that little bit more, and let them play and enjoy the freedom and the sun and warmth.

Later in the evenings we can eat again oustide as the sun goes down. Chilling, succumbing to the slower pace of life in the Mediterranean. Then later take in that promenade along the sea front.