As you know yesterday was my birthday, just another one, no major milestone. I encouraged the kids the day before to do something, I wasn’t expecting them to buy me anything, far from it. With Hubbie away, I just encouraged them to create something : make something, draw something, write a poem, just do something for me. They expect their birthdays to be recognised and celebrated, and I do too!
It’s the thought that counts and it’s important to show you care, to give something of yourself.

King Julien scurried off, after demanding coloured card, crayons and so on to create his little masterpiece. Demanding first my favourite colours, he then requested I not follow him and knock first, if I went in his bedroom. Sometime later, he returned, pride oozing from every pore, he had finished. He had hidden it under his pillow until morning.
Tuna (the Teenager) however just carried on reading her book, yes, she’d do something later…

Spike however rushed over to the plastic boxes stuffed full of knitting wool, all recently re-organised by colour, found the chunkiest needles, and started casting on. You could see his mind whirr into acion as the needles clicked as he knitted the stitches, the plan being created as he clicked away.

Yesterday morning started off and you know the sweetest thing, it’s the smallest things that speak volumes. The older two went off on the school bus, not having finished their creations, they would come back later. It was still my birthday later…
But King Julien asked if I’d like toast for breakfast. He disappeared into the kitchen and popped the bread in the toaster. I then heard drawers being opened, rummaging going on. He was definitely searching for something. “Where’s the loveheart cutter?” he called. 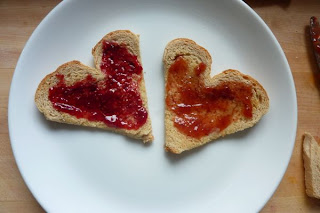 As for the masterpiece, it was full of “I love you” written in red, purple, and pink.
My heart was bursting. It was the sweetest thing…

What’s the sweetest thing that’s happened to you?
The Lunchbox World Team x

ps will have to add images later… Techie issues.

« Did I Mention It’s My Birthday?
Lunch Box A-Z – P For Penguins and Pirates »