You can not believe our excitement and delight! We won!
You may remember, King Julien entered the competition to win a Skylanders starter pack at the tale end of last year here. In return we felt it only right that we share with your our Skylanders on Review post. And in case you’d forgotten, here’s just a reminder of how hard the little man worked on his competition winning picture: 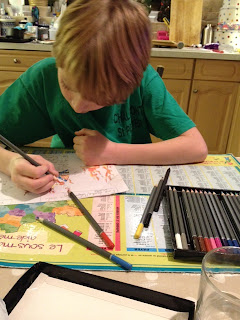 We kept all our fingers and toes crossed and waited, checking email every 10 minutes, checking the Tots100 website, waiting, thinking has he or has he not… Luckily it was a school day, so he was pre-occupied with school. Me, however, proud mum, felt my mind drifting throughout the day, “I wonder if he has won…”
If there’d been daisies in the garden, you would have found me sitting there in the grass plucking the petals from the daisies, chanting “he has won”, “he hasn’t won” as the moments ticked slowly by until the results were published…

King Julien had won! His picture had been chosen amongst a total of 10!
I had a feeling he might. You know sometimes you have that feeling, that “just this time, we might be lucky” feeling? Do you ever feel that? It is rare when it happens, but I felt it. I kept it to myself, but I felt it…
You should have seen his face but then there had also been the agonising wait for the prize to arrive. He was very good really. I mean for a 10 year old!
The parcel arrived after Christmas, and yes, we had been chasing the postman daily.  Asking “Do you have a parcel for us today?” to which the postman replied with a downturned smile and a shake of his head, “No not today son.” This carried on for a fair few days, but the wait was definitely worth it.

I was out the day it arrived, but King Julien was in with his older sister Tuna. The parcel was promptly ripped open and the various parts promptly plugged in and set up!
When I returned, it was already out of the box, raring to go! He’d even charged up stairs, gathered all his existing Skylanders characters together, and lined them up by the TV ready to go! ready for action! 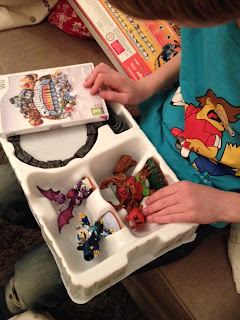 It was perhaps the most exciting day in his life and to have actually won!
That was phenomenal!

So now to the Skylanders on Review – all from the perspective of a 10 year old boy…
Q.  So I know you are dying to know. What’s it like? What does he think of it?

A.  Well in terms of other gadgets, he loves LEGO and Mario Brothers, and would endlessly play on these if he EVER got the chance. He does have a canny knack of ducking under the radar when he’s supposed to be cracking on with his homework, but I digress.

Q.  So how quickly did he manage it?
A.  Well he got through all the levels in the first weekend.
This is with timelimits on the wii otherwise, as I say, he’d be on it 24/7 and we can’t be found to be living with a panda child can we?

Q.  Is there anything he didn’t like?
A.  He found the voice over a little annoying after a while, but we found a way to turn that off, or skip it.

Q.  What if any recommendations did he have for Skylanders?
A.  He would love to be able to explore all the Skylanders world, which apparently is a feature in the first version but not in the latest version…
Perhaps there is a way he can go in there.

Q.  Now to the question, OK so what game does he pull out to play when friends come over?
A.  It is a unanimous “Skylanders” reply.

Q.  Is this because it is NEW and not many friends have it yet?
A.  Perhaps but he genuinely loves the way that you can have different experiences depending on the character you have plugged in

So there you have it, our review of the whizzy snazzy brand new Skylanders.

The answers here are the genuine responses from King Julien.
So now to you. Have you ever won anything?