Spike at the weekend had to do his homework. Nothing odd in that. Just that it was a DT – Design Technology project. He had to design a sandwich.

In school they had been looking and examining various breads, and foods to put into their sandwich all week! The only criteria for their homework was that they had to mix two ingredients for the topping, so Spike chose his favourites – tuna and mayonnaise. It also had to be an imaginative and creative design.

They then had to put their individual design together, draw it, plan it, write a shopping list for it. The weekend homework was to buy the various provisions and get ready for Monday. Thinking back now, for the truly competitive, that was the time to do a trial run and see if the creation worked, and consider ways to improve on it. We failed to think of this unfortunately!

Then on Monday they were to take in the goodies prepared for assembling and eventually eat their creation at school for lunch.

2 grapes – for the ears
1 piece of pineapple cut up small – changed to yoghurt coated raisins, look more like teeth!
tuna mayonnaise
2 small squares of cheese – to be the monster’s pair of glasses
bread x 2 slices – cut round with a metal cutter
tiny bit of cucumber – for the nose
2 pieces of salami, but the skinny sausage type – for the eyes
2 raspberries – for the eyeballs
6 wotsits – for his spikey hair

Have you ever tried to buy just 2 grapes or 2 raspberries or indeed 6 wotsits? So I had to buy all this in bulk! We are still eating the surplus ingredients now!

He called it “My Marvellous Magic Monster” and he actually won third prize, so came home very pleased with himself and insisted on making another one… 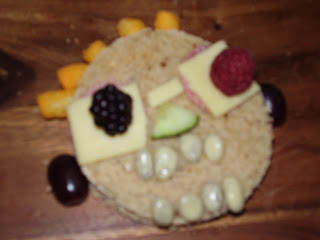 …which he then promptly ate!

A girl won with her 3D version of a “Crazy Cat” made out of baguette cleverly held together with cocktail sticks. She must have been practicing hard at the weekend! Lucky girl won an Easter Egg!

It clearly works involving the kids in food, because he ate loads that day! Not just sandwiches at lunch, but also at tea, then he demolished spaghetti bolognese an hour later!