I don’t know about you, but recently I have found myself coming down in the morning- several mornings on the trot actually, to the task of emptying out the dishwasher, not an unusual task, I hear you mutter. But I’ve actually been smiling, filled with total gratitude, at such a marvellous invention, and the recurring thought “what a clever inventor it was, that came up with such an idea as the dishwasher!”

The idea that you load it up at night, all dirty with leftover food totally caked on, and then come down the next day, to sparkling clean dishes.  (That does assume that you switched it on before going to bed – terribly annoying when someone forgets to do it! Luckily we are not so forgetful in our household, or at least I am not.)

Yes, I agree there are some people who hate the chore of loading and unloading, but really it does only take a jiffy. As long as we empty it first thing, then it’s done for the day.  Then as the day progresses, it slowly loads up, storing all the dirties. We even use it as a cupboard, for hiding away bits and bobs if a friend suddenly drops in for a coffee and a natter, and we have not had time to clear up properly.  (But perhaps my friends are just becoming a little irritated by talking to my back every time they pop round, as I hurriedly hide it all away!)

I just love the fact, just like the marvellous invention of washing machines, that you can load them up, switch them on, and you can go and get on with something else whilst it is washing, scrubbing away, quietly in the background. (Luckily I can shut the door on both rooms, so really do not hear them whirring away!)  If it needs a more thorough wash, you just select a tougher cycle, you don’t have to spend double the time on it.

So was it then fate that an email landed in my inbox a few days later inviting Lunchbox World to be part of the 12 strong jury of bloggers to judge the innovative Finish Quantumatic product?  All that powerful positive thinking, was it paying off?

So let the Trial begin!
Being a member of the Finish Quantumatic Jury, I was both nervous and excited.  We (I include King Julien here as he was very keen to be part of this experiment) loaded the gadget last night inside the dishwasher ready for its first trial.
I have a friend that seems to trial everything as soon as it comes onto the market, and her main niggle with the product is it takes up the space of a mug, and let’s face it, with lunch boxes, and drinking bottles to squeeze in, along with a days worth of dirties from a family of 5, space is always tight. And if you are like me, you try to squeeze in the maximum number of items! 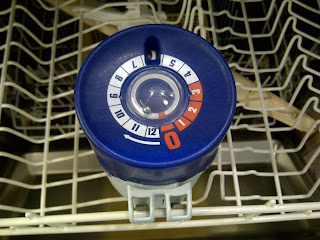 I was nervous this morning too, as I came down the stairs, had I put the gadget in upright, would the detergent have released properly, how would my dishes look? Would I be elated or deflated, would I be impressed or disappointed? In short would it stack up to what we had been told at the briefing?  How would all the lunch boxes and drinking bottles look? Would they have that extra glint in their eye?
Well…
I won’t make you wait a moment longer for our initial impressions:
All I can say is so far, so good.  You really don’t need to worry about the gadget. As long as it is upright and low down on the top rack, so that water can circulate and move around, that really is as far as you need to be concerned. The gadget does the rest.
The glasses have come out with that lovely “squeaky clean” squeak to them, and everything does seem to have a bit more of a shine to it.  Even the pans had a glint.
We have been warned that sunglasses may be required as the experiment continues, as this clever gadget adds a bit more shine every time, so we may just be overly dazzled in the mornings!
We shall see…
« Carnation Celebration Cake
Lunchbox Spring Madness! Over 40% Off Selected Lunch Box Items! »