Today was the day we’d all been looking forward to as a family.
It was the middle of half term (half the brood are off until next Wednesday (gulp).
It was to be our family fun day out.
It was one of the few things we had planned to do at least 10 days ago!
OK at the last minute, hubbie had to dash up to the Angel of the North, well Newcastle, at any rate, so we were one man down…
We are quite used to that.
But never mind.
Fairy had invited us to go up to Hampton Court for some good old family fun!

Well, two of the brood have previously been on the tour around the palace, so were very excited to be going again, and what’s more, to get a chance of going in the famous maze and have a leisurely stroll around the gardens! 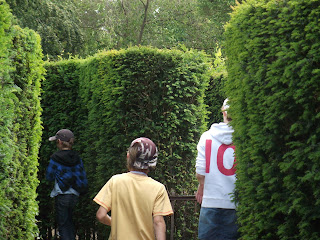 I thought perhaps the brood might be on the older side, and yes they were the oldest there for the Fairy Family Fun day, but I needn’t have been concerned. When it comes to good old fashioned fun, fresh air, and balloons, they are first in the queue!

From egg and spoon races, to face paints, to balloon tricks, followed by some fun in giant bean bag chairs, and a glorious day’s weather sprinkled in to the mix, some good BBQ food and to die for Eton Mess, it really was a fun day out!
We thoroughly enjoyed ourselves, laughed alot, which is always a good thing to release all that tension, and met some new friends along the way.
Some of whom I’ll even see again in a couple of weeks time!

Can’t wait to see the photos that were taken from the day. Apparently the mums running in the crazy running race were hysterical. So now known as Mrs Pink to the photographer, I will hastily put a small collage of shots up to give you a taster of our day and pop those up tomorrow.  (I’m really not sure if it is a good thing to be “known” by the photographer…) Em, cough, I did win first prize in that very crazy running race…
To see more photos from the day, coming soon on the Fairy facebook page, so do keep checking!

If you are thinking of heading out to Hampton Court, it is really worth it. Such an amazing place, the gardens delightful, and if you can book good weather, all the better!
We even popped in to see a spot of real tennis being played…