Some of us were lucky enough to have the kids under our feet last week, some have that joy this week! Yep, I broke into that cold sweat at the very mention of half term as it slowly loomed into view last week.

I know we should be grateful, I work from home, so can pretty much work around the kids, slot things in, have this special time together with our littlies. Or so the theory goes.
I know they are only small for such a short time, but when you’re trying to build your own Empire, it’s not so easy 😀 (cheesy grimace).

Luckily on the one hand, my brood aren’t so little any more, they are at school, they can (at times, but only when they feel like it) occupy themselves, they are able to concentrate for long periods of time, yet in the holidays, there is this reluctance that sets in, they just won’t do anything. They turn into lounge lizards with long faces. The lethargy sets in, they simply want entertainment. Gone are the days of lying out in the grass, gazing up at the sky, watching the clouds racing by, picking out cloud shapes, or skipping with a skipping rope. Yes, I suppose I do have a romantic notion of how it was when I was growing up, but this generation are only interested in technology, in staring into a screen with thumbs at the ready, poised for speedy reactions, adrenalin pumping…
So I decided that weekend, and it had been tweeted to me on twitter following my plea for ideas: “Craft is the way forward. Get out the card, paper and glue and it’ll keep them entertained for hours!”
I agree, when the kids were younger, we always had craft projects on the go… They would colour for hours, or stick screwed up tissue paper onto flower cut-outs, they would do puzzles, and sing, they embraced the seasons and life was just so much simpler…
But I did not have my mini Empire then… So they did have my full attention…

So I gathered up the troops that Sunday before half term had really kicked in. We sped off to our favourite Department Store for some inspiration and light retail therapy. (OK the long faces, the whining and the dragging of the heels came too.)

I needed a few bits and bobs and killing a couple of birds with one stone, we visited the haberdashery department, in the hope there may be something there – an easy 123 kit they could do perhaps, to get that sense of achievement, that feeling of pride, satisfaction, or at worst, some ideas as to how to keep them entertained. At the same time I secretly hoped I would hit the jackpot and find that “thing” enabling me to be freed up for a couple of hours to continue building my Empire…

I (foolishly perhaps) chose a knitting kit, easy I thought, as it was all garter stitch. (That’s just straight forward knitting in layman terms – nothing complicated). Perfect I thought, a knitted monkey, just like Harry Hill’s knitted character. The boys love Harry Hill.

With a spring in my step, we left the store, armed with these kits that would free up my time, keep the kids amused and harmony would descend on our household once more…
Or so I thought… 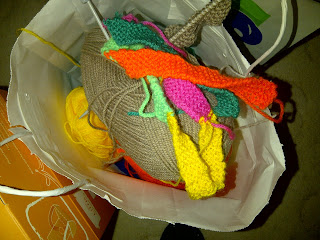 Unfortunately I had totally forgotten that when starting out with knitting, as I did myself many moons ago, that when you start, it needs a lot of time, a lot of attention and a lot of patience to learn the basic stitch, to hold the needles and so on. As you start out, you knit one, drop a few, knit some more, then drop some more. Until you reach the point, that the dropped stitch has left a gaping hole in your creation. No good, as it’ll continue to unravel. So the adult/ tutor/ helper has to intervene, to unpick it all, calmly one by one, then pick it all up again and carry on. It is actually quite a frustrating past-time when you are starting out. As with anything, once you get into it, it is actually quite relaxing and it then starts to grow quite rapidly.

Here is Spike’s completed stripey scarf and the startings of the knitted monkey’s head. We have a long way to go… 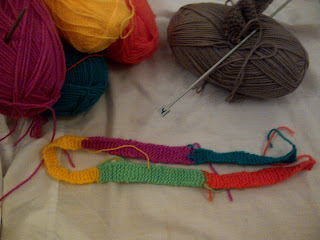 With Spike I had to re-knit everything I had unpicked as at this point it was critical, he was counting rows and he didnot want an oversized head!
So my work went out the window and knitting became the full-time occupation.

So you can imagine, not alot of Empire Building was achieved on those knitting days.
Tuna, the oldest had other ideas. Sewing was her chosen past-time on those wet days last week. She had planned a cupcake cushion for months actually. Now it must be acknowledged that Tuna likes perfection, Tuna wants to do the right thing, make no mistakes, and it must look just so.
So days were then spent umming and aahing, should it be like this, or like this. Should I make the cushion or can I cheat and sew it all on a pillowcase. Is it also cheating if I use bondaweb (this clever stuff that acts like glue sticking the cupcake patch to the cushion) or is this actually just the art of applique?
I calmly informed her it is the art of applique. Here is her cupcake project – all sewn but yet to be embellished … 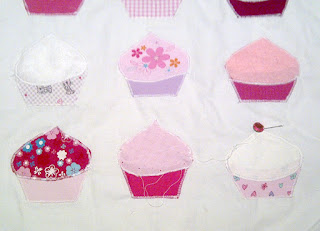 Tuna really should be chuffed with her creation as she is only 12! She has yet to embellish it, but it really shows promise.

As for the boys, they are very much at the beginning, in need of lots of encouragement. Spike completed the scarf first. He wanted an easy win! King Julien however is just on the first stripe of colour on his scarf. Very much a work in progress.
Perhaps I will have to knit a chunk or two to help them on their way, yet I also feel they will get that sense of satisfaction and pride if they complete it. We all know I can do it, but I want them to do it. True values and all that, you know. 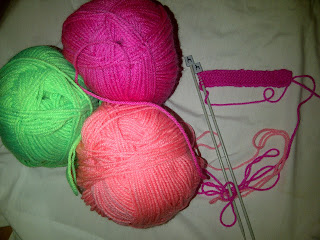 I think now they are back at school, in order to progress this project, we will definitely have to limit “screen time” whether it’s the computer, Wii or other handheld gadget, and maybe introduce 20 minutes of knitting a day. But will this knock guitar practice and reading off the list of things to do?
I do however believe that with the technological world we live in, if we allow them unlimited access, it will not help anyone long term.

For those of you with kiddlies off this week, I wish you luck. If you have any tips, do please comment either here on our facebook page or follow us on twitter @lunchboxworld.
Thanks for stopping by!

« This month a bumper hamper filled with Weight Watchers Goodies up for grabs at Lunchbox World!
Win Hamper Bursting with Goodies! Click on Ladybird To Enter Competition! »