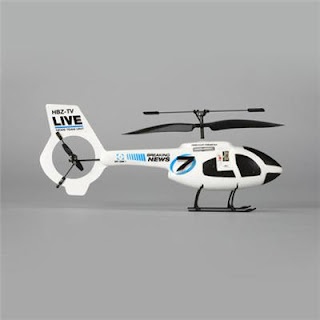 Has anyone seen this helicopter? This was the surprise present that Daddy bought that day for the brood. As well as fly their glider planes, they also had a go on this remote control helicopter. Huge huge fun and this was left charging whilst at school, so the brood could take it on another flight that night.

Neither Spike not Tuna were aware that Daddy and King Julien had left the building. We were all engrossed in some cookery show on television!

However Spike did start to think it was a bit quiet and started to ask where had Daddy gone. We stuck our noses outside the front door, no-one there, nothing to be heard, but both cars were still in the drive. Where on earth had they gone? I called, we all called. Nothing. We went back inside.

5 minutes later they reappeared, King Julien in tears, Daddy looking for his binoculars. They had only got the helicopter stuck in a 50 foot high tree in the neighbours garden, and were trying to find a way of getting the helicopter back! I mean, what are the chances of actually getting a teenie weenie remote control helicopter out of a fully grown tree that has so much foliage, you cannot even see if the helicopter is lodged in there or not…

King Julien had been flying the helicopter. You can picture it. Father and son, standing in the drive, remote control in the boys hands, father looking on. The helicopter takes off, and starts flying. Flying away from them. Heading for the neighbour’s house. Heading beyond them, further still, up and up, heading for the trees. Daddy shouted, “Cut the power! Cut the power!” King Julien being the youngest, had not heard, or maybe just had not reacted fast enough. The wind picked up, and carried the helicopter away higher and higher into the sky, and straight into the tree, laden with new lush green leaves, rustling away in the breeze.

Daddy grabbed his binoculars and spent the next half hour gazing, searching the tree for the exact location of the helicopter. Searching, over and over, it must come down. It has to come down. Now he was acting like the child who had lost his toy. Spike was furious when he discovered what had happened. How could they go off like that without him, and how could they fly it into the trees. Why did Daddy not stop King Julien. Then Tuna joined in, how could they. Why did they do that? It was proving to be a turbulent evening.

I then went in and tried to herd the brood in and up to bed. Again, it was already passed their bedtimes and we all had to be up early again the next day.

Later that night, I checked the packaging. It reads in big letters : Ages 14 and up, adult supervision required for children under 14. No experience needed.

“The future of flight is now in your hands” Yes, I agree with that one but how to break it to Daddy that the brood are only aged 6, 8 and 11!

« The secret to getting kids up in the morning…
Helicopter came home! Back at base! »