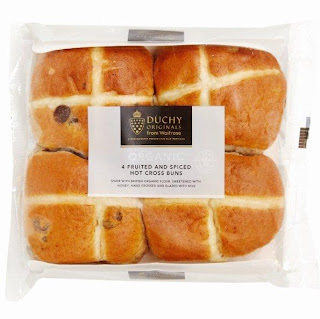 April is literally marching on like a March hare, so the team at Lunchbox Towers thought we had better get a move on with Easter, or we’ll miss the boat!

It’s always a challenge to think up fresh ideas of what to pop in that lunch box, but when we received these samples from Waitrose, the Duchy Originals, well, it all became rather easy!
Because these are freshly baked, we had to pop in to pick these up from our closest store, so we could sample them at their best. If they had posted them, they would have been dead, I mean stale on arrival.

So, it was all arranged for the one day when Spike was at tennis and Tuna at swing band, King Julien and I were on a mission gathering up the latest products to sample. This particular day it was the Duchy Originals Hot Cross Buns.
Duchy’s first hot cross buns are made using traditional cookbook recipes as inspiration but improved by using premium organic ingredients including organic milk and butter.  And each bun contains nearly 30 per cent fruit, more than the average hot cross bun.  The finishing touch before putting the buns in the oven is the creation of the iconic white crosses. Every single cross is hand piped by just two bakers who use a paste made of flour, water, sea salt and sunflower oil. Because the crosses are made and applied by hand each bun looks slightly different giving every bun their own character.
For me, the perfect way to eat hot cross buns is gently toasted just til they’re golden brown, and then promptly buttered, with unsalted butter, and eaten whilst still warm!  With a perfect cup of tea.

For me, they have that delicious combination of spice, cinnamon and lots of fruit, so there is definitely more to your munch. I know it’s a cliche but once you’ve tried these, you’ll find all the other hot cross buns out there rather inferior. So if you have the extra pence to spend, do treat yourself, (Rember you don’t have to give them to the kiddlies if you have kids!) You’re worth it!  They cost £1.49 for a pack of four.

For more lovely lunch box ideas and festive treats this Easter, do pop over to our recipe section on the Lunchbox World website.  These recipes double up as great ideas for the Easter hols too, so gather up the ingredients and bake away. You could even parcel them up and give them to Granny and Grandad! It’s the small things they treasure.