We’ve started sharing some posts with you on packing lunch for a hike, where it has to stay safe all day long. If you’ve been following this blog, you’ll know all about our oldest, Tuna’s challenge: preparing for that 80km hike challenge a couple of weeks ago. Today, once again, we’re packing lunch for a hike: Endurance 80. Yep! the day has arrived!
We were considering what should go in that backpack to keep her going throughout that 24 hour stint. What foods give energy, what foods make you lethargic, and so on. More of that later…Back to the challenge! Not only was it the distance that was a challenge, but that the 80km had to be completed in 24 hours! Hence its name: Endurance 80 (or to those in the know – E80).
Well, she has since totally recovered! (Immediately after she could barely walk, nor keep her eyes open, she was that exhausted…)
She is only 14 after all, and the previous hikes she’d managed were just 25km and an 18km Quest.  I am really proud to tell you that she managed a cracking 61km, hiking in the Chiltern Hills in Buckinghamshire but had to stop after checkpoint 17 at 0415am!!Bear in mind, she was not always with her original team. She had already swapped teams about 4 times, as her original team members dropped out at 2200hrs.  She was however determined to go as far as she could, and I believe with the right team she would have made it the full 80! 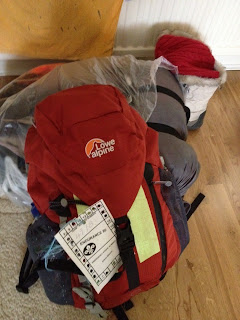 We’ve talked endlessly about this, looked at it from every which angle.  She is keen to embrace orienteering, map reading and endurance challenges such as these. However, she knew after checkpoint 17 that time was not on her side and there just weren’t enough hours left for her to complete the course by 830am. That, and, erm, of course, her eyes were shutting for just too many seconds at a time, and putting one foot in front of the other was becoming too much!

So where am I going with this?
Well, I am still keen to know what is the best packed lunch you can prepare for a hike, and such a hike as this. Some hikers had glucose tablets, others had some kind of specialist high energy gel in tubes, that they squidged down the back of their throat. Others stopped for pot noodles… then shortly after withdrew at the next checkpoint…

So what would you suggest if you were packing lunch for a hike like this? An endurance hike?