The day I was talking turkey with Neil Nugent… If you’re looking to create that perfectly cooked turkey this Christmas read on!

For the last few years our bird has been slightly on the dry side and I have been disappointed. I have religiously followed the Delia’s Christmas recipe book, right down to the timings she sets out for the run up to Christmas Eve, and the timings on Christmas Day.
Last year I blamed the bird, as I tried a different turkey breed. However I now realise I may be at fault…

I managed about 15 minutes talking Turkey with Neil Nugent before the BritmumsXmasDo began in Borough, London. And yes, we were talking turkey! 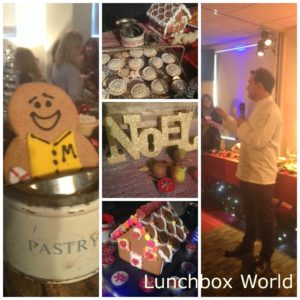 You may have seen Neil on TV in the Morrison’s adverts with Ant and Dec? He’s the Chief Exec Chef at the Morrisons Kitchens up in Leeds, where they make 50% of the fresh foods sold at Morrisons supermarkets.

So what are the top tips for the perfect Roast Turkey this Christmas?

Do not even think about putting the turkey straight from the fridge into the oven. It will “upset the molecular structure” if you do! So get the bird out and give it an hour or more, or even overnight is ok, for the bird to come fully to room temperature. (The bigger the bird, the longer it needs)

2 Unleash bird to relax muscles and allow air to fully circulate and cook bird
Over a solid surface, unpack the bird. Normally the legs are tied to the body so they remain compact and easy to fit into an oven roasting tin. Firstly cut the string tying the legs to the body, ie unleash the bird. Then gently pick up the bird by the legs. You may need some help with this, if your bird is extra large! For a few minutes, hold the turkey up by the legs. This allows the bird to relax its muscles and be more flexible. This also allows the warm air to circulate around the bird better once in the oven, allowing the bird to cook even into its armpits (the cold spots).

Never cover bird with foil
FOIL is your enemy.
Do not use foil.
It will only make the bird steam and sweat. Definitely not during the cooking time in the oven and NOT after the bird has cooked, when you allow the bird to rest.

Prepare stuffing and cook seperately from bird – keep it simple
Neil doesn’t tend to stuff the bird either. He just puts onion, lemons, inside the body cavity for extra flavour, but the stuffing he tends to put in a separate dish. This way you don’t confuse yourself with needing to add on extra time to cooking the bird to include the weight of the stuffing.
However, if you are stuffing, then put the stuffing in the neck end. NOT in the body cavity.

Trouble-free basting – smear bird with butter underneath skin
To save you basting the bird throughout the roasting time, generously smear some butter in between the skin and the meat. If you have lots of money, by all means use goose fat for your roasted potatoes, but Neil loves butter and lard on his roasties. So don’t feel you have to buy goose fat.

Invest in a meat probe – cook meat to perfection every time
To be sure the bird is cooked through, it is worthwhile investing in a meat probe. This will tell you the temperature of the bird and the optimum temperature to know it’s cooked is 70-72 degrees. Now you can pick these up for as little as £10, so that’s his top tip. And buy the simple one that just gives you a reading! Keep it simple!

Allow the bird to rest for at least an hour or more
You must allow the bird to rest. Everyone panics about keeping the meat hot, but the reality is, the bird needs to rest and with the gravy on top of the meat, serving on warmed plates, it won’t be cold. And an hour or more is fine to allow the turkey to rest. DO NOT COVER. Do NOT use foil. Just put the turkey to one side, and let it be!
Why must you let the bird rest? Neil explained:
Firstly, the turkey is out of the oven freeing up valuable space to cook all the trimmings – the roasties, the parsnips, and whatever else that needs the oven space
Secondly, it allows the meat to relax, it settles the juices and allows the juices to be reabsorbed back into the bird, ensuring maximum flavour.
A cooler bird is easier to carve and more tender. Have you ever noticed this?
Carving cold meat is so much easier. Neil did give me the scientific reasoning to this, but let’s just say, the bird relaxes, the mollecular structure of the meat relaxes and is all intact again, so easier to carve.

If you are convinced the meat is too cool to be eaten, you can pop the bird back in the oven just to re-warm it for 10 minutes or so. But NEVER eat HOT meat. It has no taste.
Food should be eaten and savoured at its optimum warm state, no hotter…

Unfortunately there was no turkey in sight for a demonstration, which would have been fun, seeing Neil Nugent getting stuck in!
Maybe I will get up to visit the M Kitchens up in Leeds soon… Unfortunately I missed the last opportunity.
Next time…

Anyway, back to carving. The best way to carve is to take the whole breast off the bird in one large chunk. Then carve in to slices across the breast. This makes the meat more tender and it is so much easier to carve away from the bones and carcass. Also the way you carve if the breast is still on the bone is just in the wrong direction…

Now to the roasties – how do you make the perfect roast potato?

First, choose your potatoes wisely. Maris Piper or Steamers make a great roast potato. NEVER EVER BOIL potatoes. Just let them simmer. Just par-cook for 10 minutes until the outside is cooked. Neil then coats them in polenta to get that crispy edge to them, then use hot butter or lard or dripping.

So you know what I will be doing this Christmas?

Yes, I will religiously be following all of Neil’s Turkey Tips above, right down to the bird being at room temperature before even starting, not fretting about the resting time, the carving, and I’ll try and add that smile too!

So what would be your tip for the Christmas Dinner preparations?

Disclosure: I attended the Britmums Xmas Do and came away with some Morrisons Christmas goodies to try. However all thoughts and opinions are my own.

« Hummus and Carrot Sandwiches
Copas Turkeys -The Most Pampered Turkey »