Although out of season, we headed off to Woburn Safari Park a few years back, (and from all accounts the experience is still the same – my sister went there a couple of weeks ago in April 2021). Now back when we went, Woburn Safari Park was voted as being one of “Britain’s Best Days Out for the Family”. It was early January but we, the family, all wanted to savour some more family fun.

And here we’re going to tell you why…

Woburn Safari Park, for us, feels like a part of Africa has been plonked in the British countryside. It is a pleasure to see the animals at close hand, roaming freely in the parkland at Woburn. 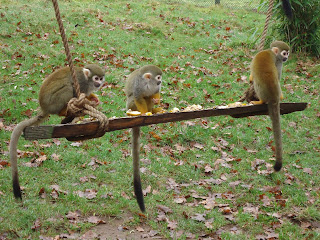 The day was a bleak one, we cannot deny that. We should’ve gone on the Saturday but did not get our act together fast enough. So we hastily planned it for the Sunday, got up early, packed a picnic and headed off, maps to hand, itinerary all set for a fun packed day out at Woburn Safari Park!
You can imagine the challenges you face of getting 3 secondary school aged kids all pointing in the same direction, all with their own head strong minds, to get in that car, and be appropriately dressed. What’s more it was the timetable we’d set for departure then heading up the M1 for some family fun!
But the weather didn’t matter. Yes, there was a fine mist in the air, trying to rain but that soon stopped.
We are truly lucky as it only took 40 minutes on the motorway and being early January the roads were clear. We were sent complimentary tickets by Moneysupermarket.com for the purposes of the review. (all bar King Julien’s which we paid for).
As we pulled up at Woburn we were full of anticipation as to what lay beyond those huge lion statues at the gated entrance…

On arrival at Wooburn Safari – what to expect?

We arrived quite early, just 30 minutes after the park had opened its gates at 10am and headed off on our first road safari. Urging hubbie to slow down at every opportunity, we just had to capture every single animal we glimpsed, as we chugged round in the old girl round the tracks we went. We saw everything! Every animal you would expect to see was there! The zebra’s, the rhino’s, the elephants, the giraffes, the buffalo, wildebeast, antelope, ostrich and onwards into the lion enclosure.

We sat in the car, waiting with increasing excitement as we heard the gentle hum and rumble of the gate behind us close. Then looking forwards, saw the gate ahead break into a gentle hum and open slowly. The anticipation was immense. I think that is all part of the experience! Windows all firmly closed, child locks on, we drove forwards. Just five cars or so in the lion enclosure, all moving slowly, cautiously, round the roads until we spotted a glimpse of the first amur tiger, prowling proudly up and down, without a single glance towards us. He stopped, turned, and walked on, passed our car, onto inspect something further away that had caught his eye.
We drove on, with already hundreds of photos captured digitally, passed the wolves, and the grizzly bear, until we found the lions, all lying down, eating. A clear hierarchy was immediately apparent as to who could eat first, who had to wait their turn, all basking in the early morning freshness. No, it was not sunny, but they all happily lay there, glad to be alive. 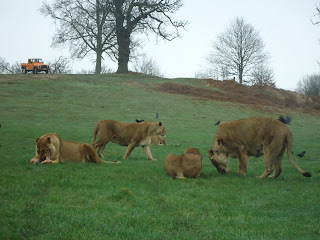 We paused for 5 minutes or more. With no rush, no-one behind urging us onwards. No, that is the beauty of going out of season. We could happily linger, watching in silence at the lions interacting. Only uttering a whisper if we wished to speak to one another, afraid the lions might hear us, not wanting to interrupt the natural flow of events.
Always visible the orange jeeps with rangers at-the-ready, parked up around the reserve, just in case something happened with the animals or with a car. That was a comfort for me for sure.
On we went, round to the gates to exit the lion enclosure, we waited again for the gates to close behind, before the gate slowly opened ahead. Always safety conscious, with windows firmly shut until out of this area.

On we went round passed the giraffes, the zebra’s, pausing to allow them to cross…
(chortling to ourselves at the zebra crossing!) and onwards towards the monkeys, windows fully down momentarily, allowing some quick fresh air to circulate in the car whilst out of the lion enclosure, before arriving at the African forest area, the area of excitement and cheekiness – full of monkeys.

With signs everywhere cautioning you to keep windows closed, not to feed the monkeys, enter at your own peril, fully responsible for your own cars should it be damaged, we gingerly drove in, glad to have driven up in the old girl.
Through the gates we entered and we slowly nudged the car forward, keen not to scare the monkeys and also mindful of them running freely, darting in and out, fighting each other, jumping here and there… Then suddenly up onto the car. Not just one, but two then three monkeys.
Hands quickly grabbing at the debris stashed down by the windscreen wipers, monkeys keen to forage anything that might be edible. Hubbie had long stopped the car, engine gently humming, as we watched, in silence, and in awe, the monkeys sitting eating, foraging, searching for another grub. Others on the road side fighting, goading each other…. Just like the kids, goading each other, egging each other on. Another chance to observe the hierarchy that exists in the animal world. You could feel the mounting tension, would the monkey fight back or just let it go? 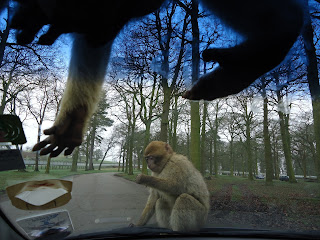 The monkeys eventually tired and jumped down from the car, onto another, tempting them with a tap at the window…
We drove on, onto the foot safari, parked up, grabbed our picnic, ate a quick sandwich before heading off to see the penguins. 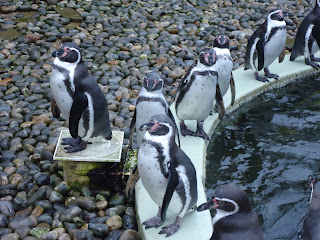 Yes, we had an itinerary to follow: feeding time at the penguins, birds of prey demo, parrots session, then on to the elephants, back to the Australian Walkabout and finishing up with the squirrel monkeys feeding time.  Just as well we’d arrived early. There would still be time to do a final road safari before heading home.

Now if you really want to treat the family, you can pay extra and be a VIP and even be a zoo keeper for the day!  Anything is possible! The birds of prey was just amazing as the owls swooped low skimming the top of my hat! 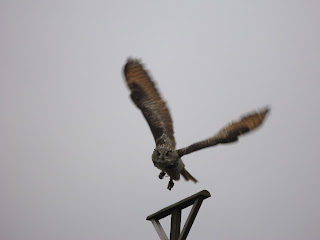 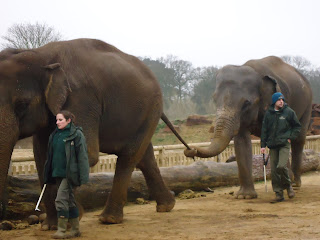 We even were shown the tusks. Then off to help feed the squirrel monkeys!

And because we arrived so early we still had time for one last road safari before the light faded… So round we went again, lingering with the lions and hanging out with the monkeys. Pure Heaven!

So what did we think of Woburn Safari?

The beauty of Woburn is that it is not just a spectacle to see the animals. It is way more than that.
They are actively preserving the animals lives, conserving the species for future generations.  All the animals, having been bred in Europe, have totally adapted to our climate, so we can learn and be inspired to care about the wildlife.
And it is definitely a place to be visited as a family, whatever the age of the kids. The older the kids, the more they’ll get out of it. We hung on every word at the demonstrations and talks given. The kids ever hungry for more information!

It was a truly magical day that we will definitely repeat! Particularly if you’re savvy with your purse and search for discount vouchers on the Moneysupermarket site!

What I really liked was being able to really get up close and personal with the animals but in a safe way.

The huge plus for going off season is that you will have the opportunity to do several laps of various enclosures if you smile sweetly, so although it was overcast and a chilly day, the fact we felt as if we had the place to ourselves was a huge huge bonus!

Please note: This review was made possible by the complimentary tickets sent by Moneysupermarket.com.
All information correct at time of publishing. All views and opinions are our own.

So over to you? Do you think you will visit? Or have you visited?

Is this enough to tempt you to visit Woburn Safari? Which venue would you add to the list of Britian’s Best Days Out for the family? We’d love to hear your thoughts.