When I mentioned to a couple of fellow mums that we were heading off to Thorpe Park at the weekend, they all responded in a similar way – sucking in their breath, with raised eyebrows, as if to say “rather you than me my dear… ” That little knot started to develop in the pit of my stomach…
Fast forward to the end of the day, driving back home…
I asked the kids to describe their day at Thorpe Park in one word – “EPIC” was the reply.
I have never been offered so many thank yous, hugs and cuddles after a FUN day out with the family as I did this day!

This weekend, just before Tuna’s birthday, we wanted to do something special, something we hadn’t done before. And with hubbie often away, it’s nice to do something together, when he’s back at the weekend and as a family. The weather could not have been better! Glorious blue skies, nice temperature and spring in the air.

When we left home to drive the 30 minutes to Thorpe Park, with the essential picnic for the day, the car was full of innocent children.  Little did I know this was soon to change. How could I have known I had given birth to not just one but THREE adrenalin junkies!

In case you’re new to the blog, here’s a quick intro to the family: Lunchbox Lady and hubbie. Then the 3 kids: the oldest, a girl, Tuna, soon to be 15 this week, had only ever been to Legoland in Denmark. Middle man, Spike, 12 had been to a theme park with the cubs and on various adventure outdoor days, and King Julien, 10 had been to a theme park with the beavers, but this was a few years back now.
But as a family, dare I say it, we have NEVER been to a theme park like Thorpe Park before… I know, maybe that is hard to believe, living just 30 minutes away. So we took our family picnic and braced ourselves for a fun packed full-on day of thrills…

We arrived at Thorpe Park just before the queues of cars that followed us in. We have a habit of doing this. Queuing up for a ride, just at the right time… then the masses tend to join the queue… Lucky eh? 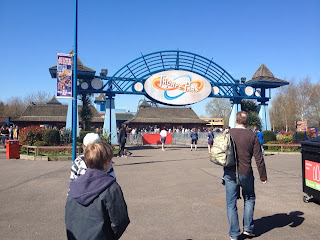 As we got closer, the nerves and tension started to mount. Our hearts started pounding with the deafening music as we walked through the turnstiles and towards the dome, the main building, before heading on out towards the rides… It’s that nervous anticipation, fear of the unknown that kicks in…
Where should we start? Where do we go? You also initially feel this kind of pressure, that you have to do all the extreme rides… But the thing is, once you settle down into a couple of rides, you realise there is no pressure. You have whatever fun you want. You accept the dare if you feel like it. There is no pressure from any of the staff there. There is no one demanding you do a ride.
So being complete newbies, we headed over to the RED FISH first. “Let’s start with an easy one then work our way up!” I suggested.
We then purchased the poncho’s and that’s when the fun really began! 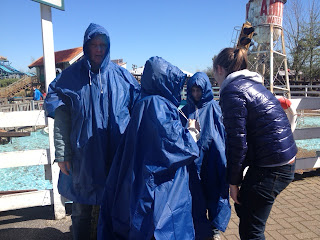 Our top tips if you’re new to this, are:

Tip One: arrive early. Gives you a chance to get your bearings if you’ve not been before or for a while and get a few rides under your belt before the masses arrive. Plus generally waiting time is at a minimum

Tip Two: Start tame (the orange coloured rides on the map are tamer) and build the confidence and dare-devil attitude up as you go on more challenging rides (the red rides)

Tip Three: Travel light if you can. There are lockers on site so you can lock up your possessions inbetween rides, but it will cost you £1 every time you go to open the locker. Some rides have boxes where you can leave your stuff whilst on the ride… left at your own risk, obviously. Or on some of the majorly wet ones, we split up – hubbie would go with the kids, I look after the bags, then we’d swap.

Tip Four: Invest in the poncho’s or take your own waterproofs – a hell of a lot more fun on the wet rides, if you are not soaked to your core! There are heat zones where you can blow yourself dry but be prepared to queue and these cost too…

Although it was a sunny day, if you stepped out of the sun there was a definite nip in the air, and who wants to look like a drowned rat after the first wet ride? OK some people do, it’s an extra notch on your thrill and adrenalin junkie rating if you DON’T wear a poncho, but I just thought that would literally put a “damper” on the day if we didn’t invest…

Tip Five: mix up the rides in intensity and daring so you’ve a chance to recover inbetween thrill rides (well, for us parents at any rate!) We tried to cover off most of the orange shaded rides which are the tamer ones!

Tip Six: know your map and know which rides have camera’s – remember to smile for the camera! Take a note of the photo’s you might want to buy and the ride it was on after each ride you complete. Keep them safe until the end of your day, then you can purchase all the photos in one go from inside the dome at the photo collection and benefit from huge discounts!

Tip Seven: Don’t eat lunch before a daring ride! You might see it again!

Tip Eight:  Not all rides have a waiting time, so take a look at a handful situated together and go for the one with the shortest waiting time… Then maybe a while later go back and check the rides you haven’t done yet

Tip Nine: Don’t push the kids if they are not ready for the ultimate challenging rides – you can always save those rides for next time. (King Julien was all up for the RUSH but at the last minute, with all those sound effects of the piston going PSSSSH back and forth, combined with the deathly hush from the crowd, he decided it was too big a step. So he and I walked away, watched the others, and then all moved on to the magic carpet QUANTUM, which he loved and did twice back to back!)

Tip Ten: If it is your first time, save some rides for the next time! As a girlfriend of mine suggested, you don’t want to have done all the rides by the age of 12!

Tuna, the ultimate adrenalin junkie in our family, closely followed by Spike, are already planning their next trips where they definitely want to do: the ultimate rides. The queues for COLOSSUS and SAW – THE RIDE had increased to a 70 minute wait and the park was closing soon… She only has one slight regret that she went on the shocking DETONATOR! (From up high you do not hear the count down, so the descent suddenly comes out of the blue… literally)

Our Favourite Quotes from the day:

Girl coming off the DETONATOR: “Oh my God, I thought I was going to die!”

Guy on the TIDAL WAVE commenting on the “DETONATOR “It’s not as bad as it looks!” Tuna was shocked and still is shocked at the falling sensation… She was sitting at a corner, so could see no-one, as everyone was behind her. I think her experience was more extreme as she really thought she was up there on her own!

Hubbie said “I think you’ve just got to go for it! Don’t you?” then promptly sat the next ride out. It was the STORM SURGE (tame or what?)

It turns out they are all the ones with water: LOGGERS LEAP, TIDAL WAVE, STORM SURGE, DEPTH CHARGE… 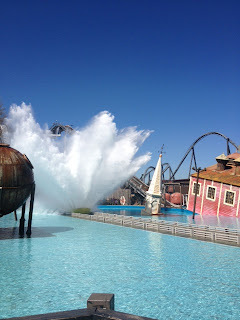 You can tell we had an absolute brilliant day! So if you are thinking of family fun and have similar aged kids, just GO! And what’s more, you can stay over and pay just an extra £6 per ticket to do it all over again on the Sunday. Now they do have their brand new CRASH PAD, a place you can stay overnight – and that is exactly what Tuna is eyeing up: she is hatching a plan of staying over one weekend with her Explorer group! She is already urging me to purchase Kellogg’s cereals and Friijj bottles with their special promo of either Adult goes Free OR 2 For 1 at Thorpe Park! Not sure how long the promo’s will last though, so hurry!

If you are thinking of half term fun, if you book in advance you can qualify for greater savings, so do check out the Thorpe Park website to take advantage of the lastest offers.

So have you been to the nation’s Thrill Capital, Thorpe Park yet? What did you think?

All opinions are our own. These tips are suggestions of how to approach the day if you’ve never been before. Clearly if you’ve been, you’ll have your own ideas!
For clarity, I was asked to go to Thorpe Park in exchange for a review of our day. Check out the Thorpe Park website for latest pricing and special offers.

« Disney’s Shake It Up CD Review
Lunchbox Idea : The Anchor News For Sandwiches! »