Phase 2: the photoshoot.
Sunday 10am, the photographer arrived promptly, armed with lighting, cameras, spare batteries and so on. I have to admit, it was the only day the brood were activity free! 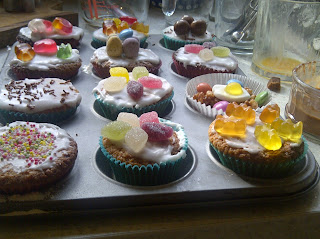 Being one of the 12 strong Finish Quantumatic Jurors, we are the “Young Budding Cooks, Helping Mummy Bake in the Kitchen” and photos are needed for the Finish website, so anyone can go and look at the Jurors, read all about us, and our opinions of the product.
I have to say it was a bake-a-thon! We have never done so much baking in one session or possibly in one month!

We baked cupcakes, iced and decorated the cupcakes; we’d made another cake that needed icing and decorating too.
Tuna was keen to make her favourites – crispy crackolates, (that even I used to make as a Brownie) and complete this task solo. This required butter being melted, chocolate and golden syrup too, so lots of sticky gooey mess, all caked on to the pan, then the rice crispies were mixed in, and a spoonful or two dolloped into cupcake cases and finished off with eggs or sweeties on top. 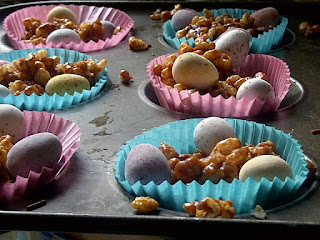 King Julien was keen to whizz up a batch of lemon biscuits, his favourites from his after school cookery class. He had to separate the eggs, and wow! How many eggs did we get through. He chose to tap the egg with a knife, just as his teacher had showed him at school. We only needed two, but he carried on separating the eggs. What fun!
All proud, having completed icing the cupcakes, Spike wanted to join in. 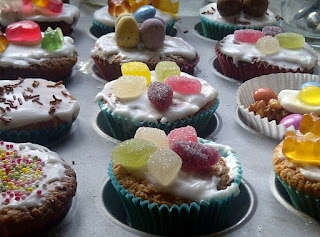 He wanted to have a go at separating some eggs… “Whoops!” he uttered as slop went a couple of egg whites onto the floor.
“That’s right,” the Photographer said, “Lots of mess, lots to clear up, carry on doing what your doing, just mum to look up!”  “Great! This is what we want, real people doing real baking! Lots of mess!”

King Julien meanwhile was ready to cut out the cookies. We dusted a thick board with flour and commenced rolling out the cookie dough. Oops, off rolled the rolling pin, onto his foot! Oh dear! Would he be able to continue? That’s it, quick hug, and back to the task. Armed with cutters, he made some mini gingerbread men, love hearts, stars, and more, then loaded them onto the greased baking trays.  (His aching foot was soon forgotten!) 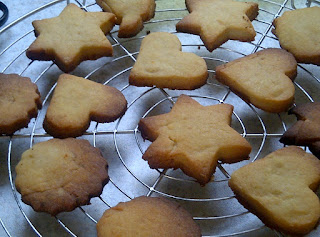 It was a hive of activity. Hubbie had made a sharp exit and was busying himself reading the Sunday newspapers from cover to cover somewhere remote.

Back in the kitchen, we then made Jamie Oliver’s chocolate ganache, a first but actually really simple to do, and so delicious. Again lots of melted chocolate caked on to bowls, and pans, lots of eggs drying and setting hard on the dishes.  The boys very kindly ladelled this chocolate creamy mix into little glass ramekins! Marvellous, a slop here, and a slop there.  More mess… 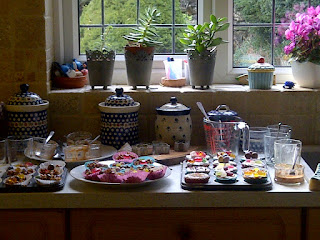 “OK, what next?” asked the photographer.
Mmmm I had to think quickly, “Aah, the eggs, I know, meringues!” I said.  “I can’t remember exactly, but if you whisk up egg whites and add some sugar, you can make meringues!” I’ll check with Delia, so grabbing the well thumbed cookery book, I announced, “we can try that!”
So immediately the boys were fighting over who would use the hand whisk, I think it’s my Grandmother’s, it’s one of those antiquated ones where you hold it upright, turn the handle and the whisks go round.

Spike unfortunately in his haste had selected a bowl that was way too small for the task of whisking up the eggs. (A cereal bowl for about half a dozen eggs!) Huge amounts simply whisked over the top and slopped down onto the table, then slowly glooped over the edge, and down splat onto the floor… Lovely egg white splodgy mess and you know how it ‘s a bit gloopy, and drops in splodges as the egg white tries to all hang together… Ugh…
“No matter, said the photographer, “Keep going, this is great!”

We made the soft peaks, then commenced adding the sugar. Oh dear, I think that was too much sugar, the mix collapsed under the weight, and with further whisking went totally runny.
“Great! Just a few more!” announced the photographer. “OK, I think we’re done!”

“Shame” I thought! “All over so soon! We were just getting into it!”

“Lucky you’ve got Finish Quantumatic” the photographer said, as he started to pack up all the equipment. “Now everything just goes in the dishwasher…”

“Mmm” I thought, “but someone has to load it and clear up the mess…”

A couple of hours, and several cups of tea and cakes later …  I reflected, at least we’ve loads of homemade goodies to pop in the lunch boxes this week! I’m ahead of the game on that front at least! 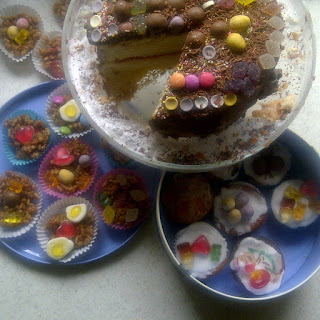 The dishwasher had completed its cycle.
Now we would really see if Finish Quantumatic was up to the task.
Question:  Would all this hard caked on chocolate, dried icing, mucky cake tin, chocolate gooey mess that had stuck hard really be gone?

Answer:  Yep, as long as you don’t over-fill the dishwasher, (as you shouldn’t do anyway), it seems to work a treat.  In this wash, there was not a single item that needed another cycle.
However, we did have to wait a couple of hours until we could do the next dishwasher cycle, to allow the gadget sufficient time to totally cool.

The trial continues, we’ll have put it to an even tougher test!  Next time, King Julien suggested “Let’s burn some baked beans in a pan Mummy!”  “That’s a good one!” I agreed.