It was Saturday morning, the sun was shining, Spring was definitely in the air. I said to hubbie, “Let’s go to Windsor!  It’s a lovely day, I fancy sitting out in the sun with a capuccino, sun in my hair, watching the world go by! What do you think? We can park in the usual spot and have that massive walk, to help get rid of all that excess energy the boys seem to have!” 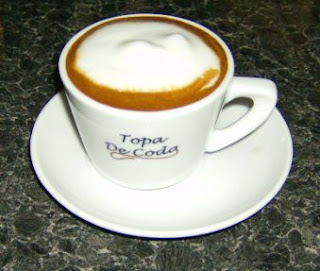 I also thought, we could appease the brood by popping into the department store there, so they could all have a good look at the huge toy department – any kid’s dream!
(What I didn’t say: I also wanted to quickly pop into Cath Kidston, check out the fabric and see what remnants they had for Tuna to continue her cupcake project (see earlier post for more…) I say quickly but it always seems to take much longer…)

Shopping done, fabric bought, we then headed to Carluccio’s. Unfortunately the timing was all out as the following events unfolded. It was already passed 1pm, hubbie had gone on ahead to secure a table, or so I thought.  We reached Carluccio’s to find hubbie was nowhere to be seen. Where had he gone?  We searched inside: upstairs, downstairs, nope, no sign of him. We then ventured outside, perhaps he had found a table in the sun after all? Well, what wishful thinking!

I then noticed him perched on a bench, not in any kind of queue, not even at a Carluccio table.  A rather glum look on his face. “Look!” he grumbled, “the queue’s out the door, it’ll be at least half an hour, they’ve all got menu’s queuing there already. Let’s go somewhere else! I’m not waiting!”
OK, I was not wanting an argument that day, so we continued walking towards the covered area, and found a rather smart looking french patisserie, with dark wood panelling, shiny glass frontage, plush leather chairs, wooden flooring within, and shelves heavily laden with freshly baked croissant, pastries and other french delights. I just was after that capuccino I’d been dreaming about all morning, and perhaps one of those extra large pain au chocolat. (They were giant size!)

We entered the cafe to be confronted by a waiter, who in broken English announced it was only take away service, so we would have to order at the counter. No problem. The brood and hubbie all sat down in the rather smart leather armchairs in the window, and I approached the counter to place our order.
“Madam, please sit down, someone will be with you shortly.”
“But I was told to come and order myself!” I replied.  “Can I at least give you my order?”
“Madam, please, we will come and serve you. It is just the drinks that have to be in takeaway cups, there is no crockery. Please sit down.”

I was starting to get irritated, but did as I was told, sat down and we waited. We tried to act all relaxed, but we (I mean hubbie and I) knew if our order was not taken soon, the brood would get restless, we tried to distract them…

We then discovered in our further 10 minute wait (this was just for our order to be taken!) that the cafe had only just opened that day, so that, at least, explained something. The staff appeared to be rather confused, all huddling together over by the kitchen doors, all whispering amongst themselves, no-one really knowing who should do what, cover which tables and clearly some of them had never waited in their life!

Our order, although a simple one, was at last taken but we immediately lacked the confidence that we would get what we ordered. The waiter again was foreign, (no problem) but he wrote nothing down, nor did he ask any questions to clarify our order. We wanted to minimise the wait time now. (Our brood is a bit like a time bomb and we had to act quickly).  The brood wanted ice-cream in a cone, and a drink each; for the adults: two capuccinos and two pain au chocolat.  In all, it should have been quick, and straighforward: no cooking involved, nothing tricky, so should be along in a jiffy, or so we thought…
Another ten minutes passed, and nothing arrived.

Meanwhile we observed lots of potential customers arrive and be turned away. We also noticed some customers that did have crockery, eating a main, followed by dessert, so it was all rather bizarre. I was starting to wish we had just walked away. I mean, who wants to sit in a plush leather armchair holding a takeaway coffee cup?

A waitress with blond hair, approached our table, this time English. “Terribly sorry but what ice cream did the children want?”
“One mango, the other vanilla” we replied. “How much longer do we need to wait?”
“It’s coming shortly, thank you” she replied nervously.
Off she went and a waitress with long dark hair returned to apologise for the delay.

How many waitresses and waiters did we need?  We’d ordered cafe fodder!
The capuccino I have to admit, had the stiff froth on top, just how I like it, so it was a good one, (nothing like the runny ones you tend to get from Starbucks or Costa coffee).  Just a shame about the cup…

The icecreams then arrived 5 minutes later but in sundae glasses. The brood had spotted the delicious wafer cones behind the counter, and wanted those, but waiter number one had never asked.  The ice-creams disappeared to return another 5 minutes later in cones.
OK at last, our order was complete!

The worst thing though was for Tuna – she really got the short straw. Each cone was supposed to come filled with icecream wrapped in a mini paper cone, then wrapped in a serviette.
King Julien however had his vanilla icecream in the cone, but had no mini paper cone. He just had the wafer cone wrapped in a serviette. As Tuna slowly nibbled away at the cone and icecream, relishing every mouthful after such a long wait, she discovered some paper inside her wafer cone.  She had King Julien’s paper cone inside her wafer cone!  So instead of tasting her wafer cone flavoured with the mango icecream, she had dry cone, then soggy paper with the icecream sandwiched in that!  She had to suck out all the icecream from the paper cone! For those that love icecream it was a disaster! All that anticipation of soggy flavoured ice cream cone just disappeared…

I’m afraid I did complain. It was just like a comedy of errors, almost like a candid camera. One thing after the next. I kept thinking someone was going to pop out, and say “Gotcha” but no, it was real!  They did apologise but you know, sometimes an apology just does not hit the mark. You just want it to go right.

So you see, that’s why we should’ve just waited and gone to Carluccio’s.

Note to self: stick with Carluccio’s, you know it’s worth the wait!

Have you any restaurant disasters or funny experiences you want to share?  Do feel free to leave your comments. We’d love to hear them!

Thanks for stopping by!