LEGO Love – do you have this in your family too? We have always been LEGO fans and the love for LEGO burns ever more brightly in our family. Particularly with King Julien, who has just turned 11.
We’ve been asked to think of our favourite LEGO memory.
Thinking back for King Julien, it must have all started for him when he was about a year old. So this LEGO love, this love affair with LEGO has been going on 10 years! First it was the DUPLO and then he rapidly progressed to the more complicated LEGO city, Star Wars, Indiana Jones and most recently the Hobbit and the Superheroes ranges.
If we get a chance to go to Watford, the boys are the first to raise their fists in the air in the hope we’ll visit the new LEGO store there. They are members of the LEGO club with posters all over their walls and we even manage to visit the Watford store on day two of the store opening, winning themselves various prizes in the “put as many people together in 60 seconds” game. King Julien set the record in store with 5.5 people! Since then we’ve been back most weekends. I think it’s the boys’ dream to work for LEGO and have the opportunity build LEGO from dawn to dusk!We’ve always had LEGO in the house, his older brother and sister adored it too, and would always be creating the Duplo railway track, and once or twice our whole floor became a LEGO village, using up every piece we had! We even make sure the train track circles the Christmas tree each Christmas!

But if I have to pull out ONE memory it has to be our visit to LEGOland Billund. 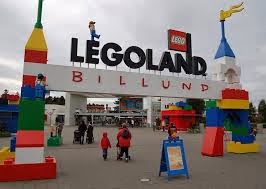 We took the children to LEGOland, but not just any LEGOland, no we took them to the original LEGOland, to Billund, the home of LEGO, in Denmark for a long weekend. We had friends living close by that we could stay with, and living in Poland at the time, it was not THAT far, well about an 8-10 hour drive to Denmark.
The kids did EVERYTHING possible and absolutely loved every minute of it.
We have so many photos but not digital ones, so here’s a collage that captures the moments beautifully! 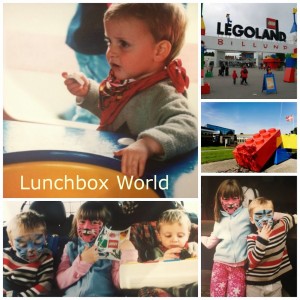 Each and every time one of the national papers runs a FREE LEGO every day competition, we are there, collecting tokens, gathering all the extra jeeps, planes, people so we can create whole armies of star wars warriers, and characters for all the displays that King Julien creates.
We even have started timing the boys to see how fast the boys can assemble one of the latest kits together. And the fastest recorded time between the boys is getting shorter each time as the competitive streak within them gets higher!
They can complete the LEGO friends in half the time it takes them to make one of the city kits, which is interesting!

Spike, the older brother has even created his own mini animation (aged 12). It’s a good start and I am so proud of their creativity!

I recently discovered a short video that King Julien made when he should have been getting ready for school. So proud was he of his latest additions to his LEGO range, on his birthday, and proud of how quickly he’d assembled them all, he filmed the display on the coffee table. If you listen closely you can hear me shouting for the kids to get their bags packed ready for school. (And yes, I am totally unaware of what he was doing!)

This has to be true LEGO love!

His lunch box is LEGO, his favourite key ring a LEGO one, and his alarm clock is LEGO. If his whole room could be LEGO that would be just perfect!

Just this last weekend we had to be in London and they were desperate to visit Hamleys and see the LEGO displays. So here they are side by side with the Queen and her soldiers!

So here’s a speeded up version of King Julien assembling one of his latest and favourite new additions to his LEGO range, the Galaxy Squad – he managed this in just 40 minutes, but a chunk of time was searching for a missing piece that had been overlooked on the dining room floor. Feel free to share, this is also on YouTube

I hope from this you can tell how truly excited King Julien and the family would be to venture up to London and see a preview viewing of the amazing new LEGO movie!
It would make all his dreams come true!
If you haven’t heard about the amazing LEGO movie coming out next year, you have to see the trailer below. This is sure to whet your appetite!

So what’s your favourite memory of LEGO?

This is our entry into the LEGO competition running over on the Tots100 website, and we’re in the running to win the amazing prize of seeing a preview of the brand new LEGO movie starring Emmet, due for release 14 February 2014 in London – the perfect family treat – do you see that 14-02-2014 – the date is the mirror image – that’s true LEGO love!

« Chosen to be VIP Member of Higgidy Pies!
Hummus and Carrot Sandwiches »