So what did I have for lunch today? Gordon Ramsay Plane Food.

Well, this was Tuesday actually. I was a buzz of excitement, and full of anticipation. I was off to Heathrow, and not just the old terminals, oh no, off to Terminal 5, the BA terminal that opened in 2008.
I was invited for a spot of lunch in Terminal 5’s brand new picnic area. Yes, they’ve put some turf down and created the first inside picnic area in an airport in the world, I hear.
What my friends cried?
Off to Heathrow but not jetting off anywhere?
Yes, I took my passport and went airside and mingled amongst genuine travellers!

For me, I am always abuzz with excitement at the thought of being at an airport. I love airports. I love to people watch, to see the coming and going. To see how people are dressed, to spot the nationalities, to hear the languages and loads more. It is that anticipation of people on the go, travelling to who knows where. I love to see all the planes lined up on the tarmac, at their gates, waiting for the next flight load of passengers to board, and go off, up and away.
And I was just invited to do just that.
I was invited to sample some amazing snack food and picnic food, that not only will help you travel better, but that will make sure, that on arrival you’ll be in a good mood too!

You see, there is new research out, and it is not surprising when you stop to think about it. It now takes a Brit up to 4 days, yes, Londoners are the worst, to unwind into their holiday. So you see the problem: why waste 4 days of your holiday unwinding until you feel in a relaxed state? Why not get to the airport early, sample some of the delicious foods on offer, and start your holiday there and then, and get on with the holiday as you mean to go on.
Don’t waste the time getting into your groove. Or that’s how the theory goes.
But the trouble is, sometimes it is not that easy to switch off just like that.
What with modern day technology, we all have mobile phones, so unless you totally switch off all your gadgets, it takes time to switch off mentally.

Now I did think I travel rather alot compared to the average Brit, but I seem to have been out of touch. I had no idea that it’s possible to actually purchase food and take it on the plane. I am hoping there are lots of people out there that perhaps thought the same as me. I thought it was ok to purchase a sandwich, or eat airside before boarding your flight, but that you really had to finish eating whatever you’d purchased, before getting on the plane.

I thought that as you can’t take liquids and so on onboard a flight, I kind of assumed you couldn’t really do that with food, other than smuggling a bag of crisps and some sweeties on board with you. You know, I thought it was either forbidden or hugely frowned upon…
Yet, now I hear it is possible to buy yourself some planefood and take it on the flight with you!
What an absolutely brilliant idea!
Who would have thought you can actually “picnic on the plane”?
So imagine being on a long-haul flight (this is often my dream), and you’re desperate for a snooze, but you want to be in charge of when you sleep and when you eat. You don’t want to miss out on the meal, but want to get decent bite sized chunks of sleep. Well you can buy your own picnic or plane food and, because it comes in its own cool bag, it will keep up to 4 hours. The salad dressing is in a separate pot, so the salad leaves won’t perish…

So we set too, entered the new turfed picnic area, guarded by the friendly picnic ranger, and were invited to sample some of the latest menu offerings from the eateries available throughout Terminal 5. There really is something for everyone… 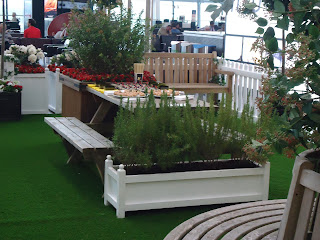 – check back later, for these images!

So next time I’m on a long haul flight, I will try and ensure I do the following:

book a flight that leaves from Terminal 5
arrive at least a couple of hours before the flight, so I can leisurely shop
build in enough time so I can dine in comfort
and finally, order up my plane food picnic, so I can take my lunch in a lunch box on the plane… 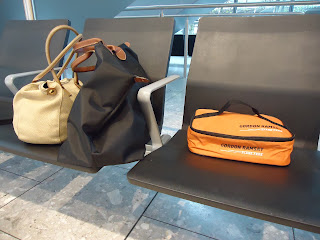 This is all thanks to Gordon Ramsay Plane Food. So before I get all starry eyed, what did you have for lunch?

Disclaimer: I was invited as a member of the press the Gordon Ramsay event. All thoughts and opinions are my own.

« How Did That Happen?
A Week’s Menu of Healthy Lunch Boxes For Kids »