This week, in the UK, the Sun newspaper has been running a special promo where you get a FREE LEGO toy each day with the newspaper. I think the last day is tomorrow, thank goodness!  Well, the boys saw the ad on TV and it became a top priority and key focus in their minds.
So with two LEGO fans in the house, you can guess exactly what we’ve been up to! 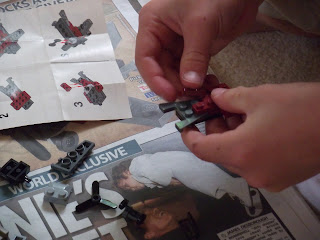 Yep, trotting off the the newsagent each day to buy not just one Sun newspaper but two, yes of course. They have to have one each don’t they. I mean they would fight otherwise…

So each day, we’ve been recycling all the newspapers (you’ll be glad to hear) but obviously keeping those precious LEGO toys, which they cleverly assemble in moments, and then think “what next?”

Well we’ve had a couple of rough days with it. The boys have been mucking around, misbehaving so I’m afriad that the LEGO promo has ended up being a bit of a bribe if they behaved well, ie practised their guitar, did their homework, were ready for school by 830pm, shoes on, ready to go out the door… You know the drill.

Tuesday I think it was, we trotted off after school to be told by the sales assistant in our local WHSmith,” I’m afraid we’ve sold out. We do have Sunday, but not today”. So I eagerly grabbed the LEGO on offer, and we beat a hasty retreat, with both boys parading long faces.

The next day, we again went after school, to be told they’d sold out of everything. So again, very sad faces, but this time, a new resolve. We would go before school to ensure we got the LEGO. So, for us, it proved to be a huge incentive:  to get the boys up on time, dressed, breakfasted, and ready for school so we could leave at 815am, latest.

This is the day the boys showed their true colours!

King Julien, the younger of the two, took the lead, and literally dragged his older brother, Spike out the door, as he really wanted the LEGO!
He even went to the lengths of loading the school bags, PE kit, tennis bags, coats and more into the car, so we would leave promptly…  King Julien did not want to chance it… He MUST have that LEGO…

Well, successful it was! We managed to get to WHSmith, make the purchase, grab the LEGO, then nip to the Post Office, collect the mail from the PO Box, walk back to the car AND drop the boys off, all before 830am!!

So if you ever need an incentive to get your kiddlies off to school on time, perhaps this is a good one to keep in mind!
Thanks for stopping by!
The Lunchbox World Team x

PS if you haven’t seen the NEW LEGO Lunch boxes and LEGO man drinking bottles, see them in the Lunchbox World Shop. All in stock, many colours, many sizes too. Even the new snack pot size for little people (or the kid in you!)