So we’ve lived to tell the tale.  The day after…  Mother’s Day has been and gone. How was it for you?
Was it something like this… 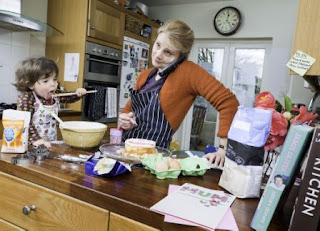 The Mother juggling the day just like any other when guests come round, the baking, the cooking, the gifts, the kids…
Or was it text book style, and how the media like to portray it?
– idyllic, Mother totally pampered, surrounded by happy family, sun streaming in the room, kids running around, kites flying…?
I always think everyone else is having the great time, but maybe it isn’t always like that as Sainsbury’s poll found out.
Sainsbury’s conducted a survey with loads of interesting facts:
It’s the one day of the year meant to be solely dedicated to Mum, but for British Mothers up and down the country, Mothering Sunday is simply another job list to be tackled.
From buying and wrapping the gifts to looking after the children and cleaning the house, the majority of British Mothers don’t expect their partner to do very much to help according to new research by Sainsbury’s. For 71% of Mums, preparations for Mothering Sunday are as tiring as any other Sunday.
In fact, almost one in five Mothers (19%) buy a gift for their Mother-in-law. Meanwhile, a third (33%) cook their own special dinner, 27% end up doing the food shopping and almost 3 in 10 (29%) make the arrangements for family visits.

Whether Mum gets treated to a specially prepared meal on her big day depends on where she lives in Britain – in the East Midlands for instance, almost half (45%) of Mums will make the Sunday dinner, whereas in London only a quarter (25%) will.

However for some mums, it may be a matter of trust. For instance, just 17% would actually want their partners to help the kids buy their Mothers’ Day gifts to make their day more relaxing.

Cook the Sunday dinner
Help to arrange a gift from the kids
Clean the house, in preparation for visitors
Look after the kids in the morning so they can have a lie-in
Buy the food for Sunday dinner

The spokesperson commented: “We know that sometimes Mums find it hard to relinquish their responsibilities, but we hope they get some R&R on their big day. Every hardworking mum deserves a bunch of flowers and a home baked cake, not to mention a well earned lie-in!”

What do you think of this survey? Do you agree? Can you trust someone else to do the day?  Do you even like a lie-in? I know I don’t! Once awake, I just have to get up and go and eat something.  Just the way I am, I suppose.  I think I’d be happy for someone else to do everything, go out for the day, not have to think about the washing, ironing and all the chores that need attending to.  You know, press that pause button on life!  Trouble is, though, it’s there waiting for when you do get back!

For us though, back at Lunchbox Towers, the weekend was unfolding in a peculiar way on Friday night.
The bad news was hubbie decided to go off and do a motorbike course, not just for the Sunday morning but for the whole day. He didnot tell me until Thursday night, once it was already booked. (Must be another midlife crisis! Not sure what number we are up to now? Third one?)
Worse still Spike had a tennis tournament the Sunday morning, and the tennis coach told us it was obligatory, so Mother’s Day seemed to be going straight out the window.  I tried to keep my thoughts to myself.  All those hopes of the brood making me, their Mother, some of the delicious edible treats that had been uploaded on the Lunchbox World website shoved to one side..

Obviously feeling hugely guilty, hubbie then came home Friday night having booked for the whole family to go to the London Eye! He’d booked a midday slot. We would make a day of it, and pretend Mother’s Day was Saturday instead.
It had always been my wish to go on the London Eye! Just like my desire to fly concorde on business (well, we all have dreams. Unfortunately that dream never came true – concorde was taken out of commission so my dream shattered.)
After a rather adventurous journey up to London, using all modes of transport (the trains on the Chiltern line were not running so we used the car, on foot, coach, tube, then another tube, on foot the last bit), we made it to the London Eye just with 10 minutes to spare, but the queues and the herds of people…. I have never seen so many people. (I don’t get out much)
We hurriedly went to the machine that spat out our pre-paid tickets, then joined the snaking queue and were amazed to then find ourselves on board in our capsule by 1215.
Here are some of the highlights from our day. 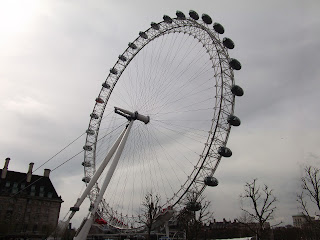 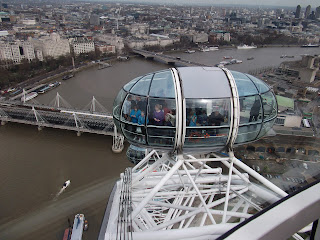 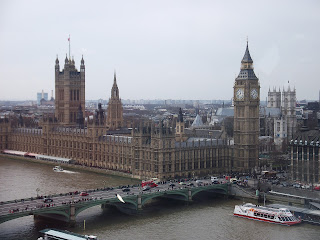 We then lunched out, (ssh! don’t tell anyone that the Lunchbox Lady didnot take a picnic nor a packed lunch. Remember it was Mother’s Day, well that’s my excuse anyway!)
Lunch was then followed by a long walk along South Bank … 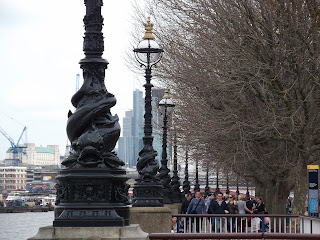 across the Millenium Bridge, hopped on and off red buses, back to Trafalgar Square where the brood all climbed on to the Lions that surround the base of Nelson’s Column. Of course, climbing on the lions was the highlight of the day for the brood and it cost us nothing! Why is that? Why is it always the free stuff that the kids enjoy the most?! When we first went up to London, their most favourite part was going on the tube, and the train! Not the actual event of going to London Zoo, oh no! )
Before I forget the second highlight for the brood was the special penny machine in the London Eye Shop.  Hunt it out if you get a chance to go there.  It is a machine that stamps a penny with a choice of 4 designs: the London Eye, Big Ben, the capsule or the London Eye logo.
You need £1 coin and a one penny. Select the design you want stamping on your penny, (luckily my Girl Guide training was paying off, I was prepared, and had 3 shiny one penny pieces in my purse, just for such an occasion as this).
You then rotate the big wheel, crunch and out pops your flattened one penny piece. Ingenious! Again, it did not cost alot of money, but again one of those memorable moments for the kiddlies and they stamped it themselves!
Then back on another bus up to Hamleys of course, then homeward bound: the tube, another tube, coach, a walk and then back in the car and at last home!
The weather had been truly kind and the views were just amazing.
I would highly recommend it. It is not like a fun ride at a theme park, you hardly notice the capsule moving as it gently rotates around.
One tip:
What we did not know when we booked, it is possible to do a “double rotation” on the London Eye.  Now on such a marvellous day for visibility, that would have been a brilliant idea, as there is just so much to take in up there. However if you pick a cloudy day, then not such a wise move, so our advice – pick your day wisely!
Tell us how was your day.
Thanks for stopping by!
The Lunchbox World Team x
Survey:  YouGov Plc. Courtesy of Sainsbury’s. Total sample size was 1097 adult females, of which 721 were mothers. Fieldwork was undertaken between 25th – 28th March 2011. The survey was carried out online. The figures have been weighted and are representative of all GB adult females (aged 18+).
« Finish Quantumatic – Lunchbox Delight?
Finish Quantumatic – The Verdict »